About a dozen local twenty-somethings waved signs reading “Keep Our Water Pure,” “Rig Free For You And Me” and “Stop Frac'ing Colo” that television cameras carried live when Shaun White twisted and tumbled through the air on his way to his fifth-consecutive men's snowboard superpipe victory.

The ESPN Winter X Games provided an ideal venue, the activists said, to educate an extremely large and youthful crowd about fracking — a method of extracting natural gas and oil by breaking rocks with a pressurized mixture of fluids. The protestors specifically sought to raise awareness of the threat of drilling in the nearby roadless area of Thompson Divide and energy plays on the other side of the Elk Mountains in the North Fork Valley. 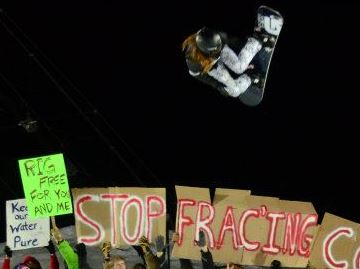 The mission went off without a hitch until about 15 minutes before the superpipe finals came to an end. That's when private security tried to shut the demonstration down.

“ESPN said they 'couldn't' air footage with our signs. They were told to make us stop, but they really couldn't do anything about it,” said Nick DeVore, a professional telemarker who grew up in Aspen.

More than once, private security guards tried to physically remove DeVore and his signs from Buttermilk Mountain, where the Winter X Games were held, but he stood his ground. After the competition was over and the awards ceremony began, Pitkin County sheriff's deputies approached DeVore, informed him that he was on private property and that he could avoid arrest if he left the grounds immediately. He did. But not before lifting his “Don't Frac It Up” sign high for all to see.

In the end, the peaceful demonstrators succeeded in not only getting their anti-drilling signs television exposure, but news organizations captured their messages in still images splashed on the Internet and in newspapers from coast to coast. It was such a success some of the same activists plan on picketing U.S. Bureau of Land Management offices along the Western Slope beginning next week.

Untitled from Eric Allen on Vimeo.

Study the advanced teachings of A Course in Miracles online; miracle study resources for students and teachers who wish to master the metaphysics of ACIM. Large free library: MP3s, publications, supplements a course in miracles