Germany's Hoefl-Riesch, who barely edged Vonn for the World Cup overall title last season, recorded her first win of the season with a total time of 2 minutes, 8.41 seconds. Vonn trailed her with with a time of 2:8.44, and Nicole Hosp, of Austria, was third with a time of 2:8.92.

Vonn still managed to build her overall lead this season to 387 points over her nearest pursuer, Tina Maze of Slovenia, who was fifth today. Hoefl-Riesch jumped up to third in the overall hunt but still trails Vonn by 554 points. 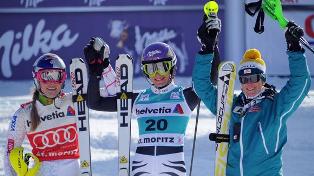 Vonn was going for a sweep in St. Moritz after having won a super combined on Friday and a downhill Saturday. Vonn leads the World Cup downhill, super-G, super combined and overall standings.

"It would have been nice to have a hat trick," Vonn said of her attempt to sweep in St. Moritz. She's good friends with her rival, Hoefl-Riesch. "I'm really happy for Maria — but I'd rather she beat me by a second. Maria has been sick, and it always takes a while when you have setbacks. It wasn't really a surprise for me that she has won."

Today's race was a makeup from a canceled December super combined in Val d'Isere, France.

The women's circuit now moves to Garmisch-Partenkirchen, Germany for a downhill and super-G. Vonn is hoping to get win number 50 on Hoefl-Riesch's home snow.

"I tried as hard as I could. I would have loved to celebrate my 50th World Cup win here in St Moritz," Vonn said. "But victory is not as easy as it seems. I had to ski five hard-fought runs in three days and it's exhausting. Hopefully, I will get that 50th win in Maria's home in Garmisch."

I can see that you are an expert at your field! I am launching a website soon, and your information will be very useful for me.. Thanks for all your help and wishing you all the success in your business. joker123