Eagle-Vail's Mikaela Shiffrin, a Ski and Snowboard Club Vail product like Vonn, just missed qualifying for a second run, finishing 32nd in the first run. The top 30 skiers in the first run move on to the final run. 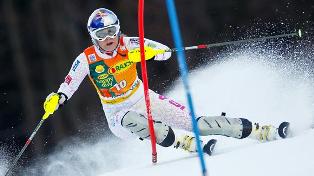 Vonn, a dominant speed-event (downhill, super-G) racer with six World Cup wins this season, just has to consistently score points in the technical events (slalom, giant slalom) to win what would be an American record fourth overall title. She currently holds the women's record and is tied with Phil Mahre (three straight overall titles) on the men's side.

Vonn was fourth in a giant slalom in Kranjska Gora on Saturday. She was satisfied with today's performance in the slalom but clearly wanted more.

"I had an OK first run; it was a solid performance," Vonn said. "I definitely lost a bit of time at the bottom -- similar to yesterday [Saturday]. But I'm happy with my performance. I attacked from the start, which is what I wanted to do."

Now the women's World Cup circuit shifts to Vonn's bread and butter, with speed events next weekend in St. Moritz, Switzerland. Scheduled events include a downhill, super-G and super combined.