The National Ski Areas Association filed a lawsuit (pdf) in federal court last week, arguing that a new clause the U.S. Forest Service is inserting into ski area permits is an illegal taking of property.

The litigation is the culmination of a water war between ski areas and the Forest Service that has gone on for years. The dispute bubbled to the surface in early November when the new policy took effect and National Ski Areas Association attorney Glenn Porzak complained about it to Congress.

“The ski industry has no choice but to defend itself against this outright taking of private property by the U.S. Government,” Lakewood-based NSAA President Michael Berry said in a prepared statement. “We value our longstanding and successful partnership with the Forest Service in delivering an outdoor recreation experience for millions of Americans that is unmatched in the world. We plan to continue to work positively and cooperatively with the agency to provide these opportunities on public land, but water rights are simply too critical and valuable to our operations to surrender to the government without compensation.” 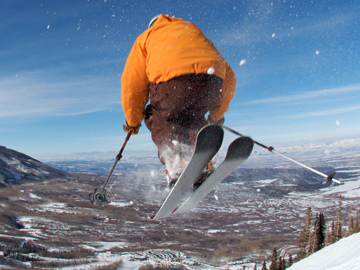 Forest officials maintain the interim directive for ski area permits is needed to ensure that water for snowmaking and other resort activities remains available regardless of ownership changes. Without the clause, foresters worry the water rights could be sold to third parties for non-ski-related purposes.

“Our interest is in maintaining the ability to provide ski areas with water into the future and to protect the public's interest by making sure that communities, often small rural communities, that are linked to ski areas can rely on that into the future,” Jim Pena, acting deputy chief for the national forest system, previously told the Colorado Independent. “... We are just trying to ensure the viability of the ski industry over time. That is what this is about; it's not about taking away rights or assets.”

The fight over water rights, which have an estimated value in the tens of millions of dollars, caught the attention of U.S. Sens. Mark Udall, Michael Bennet, both Democrats from Colorado, along with Rep. Scott Tipton, R-Colorado, Rep. Jared Polis, D-Colorado, Gov. John Hickenlooper and other lawmakers who asked the Forest Service to suspend the new clause until it could be studied further.

The Forest Service declined to do so. The new clause has been incorporated into recent ski area permits issued to Powderhorn in Colorado and resorts in California and Washington.

Ed Ryberg, who coordinated the Forest Service's ski area program from 1992 until his retirement in 2005, stoked the flames when he wrote a letter earlier this month to Udall excoriating the “unscrupulous” ski areas that he alleges NSAA represents and who he claims “welshed on their agreements with the United States, and obtained water rights, justly belonging to the American people, through fraud and deception.” Ryberg alleged the ski industry exploited the “lax regulatory environment” under President Bush in 2004 to obtain joint-ownership rights with the Forest Service. He commended his ex-colleagues for redressing “the abuses of crony capitalism” and not caving into political pressure.

Porzak wrote Udall last week alleging that Ryberg's letter contains “numerous inaccuracies” and “major relevant omissions.” In his letter (pdf), Porzak states that the pre-2004 water right clause “was not limited to water rights involving the 'diversion of water directly from NFS lands' as Mr. Ryberg states. The Forest Service sought all water rights used in connection with the ski area regardless whether they arose on the ski area Forest Service lands, other federal lands or private lands. … Another major inaccuracy of his letter is that the new water right permit clause does not only apply to water rights that arise on the ski area Forest Service lands. Like the pre-2004 clause, the new clause impacts water rights on non ski area permit lands regardless of whether they are federal or private lands. … Finally, Mr. Ryberg makes the statement that the new clause seeks to correct 'the problems with the 2004 clause with respect to Colorado.' I am aware of virtually every ski area water right in Colorado and the cases involving those water rights. There has not been a single instance where the 2004 water clause was in conflict with or caused a problem with respect to Colorado law.”

https://www.digitekprinting.com/gator-board-posters is one of my trusted businesses when it comes to printing services! They even gave suggestions with the design that I want to work with what I printed with them.