Vonn has had some success in slalom but is a much more dominant speed-event [downhill and super-G] racer. This was Vonn's first finish in three World Cup slalom events so far this season after skipping a slalom in Aspen and skiing out in her second run over the weekend in Courchevel, France.

With her top-10 finish, Vonn will head into the holiday break with a 230-point lead over Schild in the chase for her fourth overall World Cup title. Vonn had won four straight races heading into Courchevel, including a super-G earlier this month at Beaver Creek, and five races so far this season. 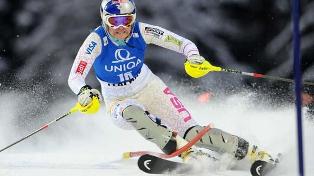 “Slalom is easier now,” Vonn said. “I feel really comfortable. I felt like I was skiing really well in the first run from Courchevel before I went out. I know I can be there; it's just a matter of skiing more aggressively.”

Vonn was 10th after her first run tonight, more than 1.8 seconds behind Schild.

“I didn't ski as aggressive as I wanted to on the first run, but it was a solid run without any big mistakes,” Vonn said. “I was happy to be in there for a second run.”

A couple of other Ski and Snowboard Club Vail racers didn't fare as well. Sarah Schleper finished her first run but didn't qualify for a second, and Mikaela Shiffrin didn't finish her first run.

I am unable to read articles online very often, but I’m glad I did today. This is very well written and your points are well-expressed. Please, don’t ever stop writing. Lifeguard courses near me

I wanted to thank you for this excellent read!! I definitely loved every little bit of it. I have you bookmarked your site to check out the new stuff you post. 토토사이트

Excellent to be visiting your blog again, it has been months for me. Rightly, this article that I've been served for therefore long. I want this article to finish my assignment within the faculty, and it has the same topic together with your article. Thanks for the ton of valuable help, nice share. check this site

https://smmwebs.com/
Hello, I read Your Article. This is very Helpful for me. Thanks. Please try
smm panel

Hello, I read Your Article. This is very Helpful for me. Thanks. Please try
Best SMM panel for Instagram