"Being at home at Vail and having perfect training every day is such a great opportunity. I'm so thankful that I have such a supportive community behind me," Vonn said after winning the first race of the 2012 Audi FIS Alpine World Cup season in Soelden, Austria to become the first American woman to win in all five World Cup disciplines.

With today's runs, training at Vail's Golden Peak is officially open and serves as the perfect preview for the Saturday, Nov. 5 First Tracks event – the U.S. Ski Team Announcement – presented by Nature Valley. 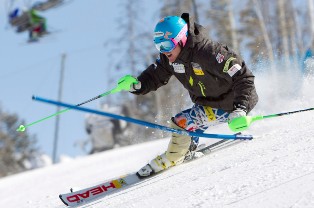 The venue opens at 4 p.m., with hot cocoa and cookies before the stage show begins at 4:30. The event will stream live on www.UniversalSports.com. Following the interactive program, fans will be invited to get autographs and take pictures with the U.S. Ski Team stars.

"I'm really excited for the U.S. Ski Team Announcement; last season so many kids came out and it was such a cool scene," added Vonn. "There was even a family from New Hampshire who flew all the way out to Vail just to meet our team. This year should be even bigger."

True to form, a family from the Granite State will again make the trek to Vail for First Tracks, though this time it will be for free after the Connor family from Bartlett, N.H., won a nationwide Facebook contest for a VIP weekend in Vail with the U.S. Ski Team.

"I have three nieces I taught to ski several years ago who are beyond excited to get sweatshirts signed by the U.S. Ski Team," said Anne Connor, whose son Mac is going to be surprised with the trip for his sixth birthday.

"It's almost Friday! We're packing the bags Wednesday night so we can hide them in the car. Mac still doesn't have a clue what's going on," added Ian Connor, who won the First Tracks contest that drew more than 2,000 entries.

To attend the First Tracks celebration with the U.S. Ski Team, check out lodging information and rates at www.marriott.com/ussa and for more information about Vail Mountain, visit www.vail.com or call (970) SKI-VAIL (754-8245).

Vail Mountain opens to the public on Friday, Nov. 18 and is immediately followed by the annual American swing of the Audi FIS Alpine World Cup, which opens with Vonn and Mancuso in action on Thanksgiving weekend during the Nature Valley Aspen Winternational in Aspen. The following weekend, Miller and Ligety tackle the treacherous Audi Birds of Prey races Dec. 2-4 in nearby Beaver Creek.

Thank you a lot for sharing this with all people you actually recognize what you’re speaking about! Bookmarked. Please additionally talk over with my web site =). We could have a hyperlink alternate arrangement among us! https://strongtoto.com/toto

very good publish, i actually love this web site, carry on it สล็อตเว็บนอก

Wonderful work! This is the type of information that should be shared around the internet. Shame on Google for not positioning this post higher! Come on over and visit my web site . Thanks =) ufabet เข้าสู่ระบบ

Very nice site, I just came to know of it yesterday evening. Bookmarked this and also stumbled upon it. Thanks a lot,You had some nice ideas in the post, I enjoyed scaning it. joker918kiss

I discovered your weblog site on google and examine a couple of of your early posts. Proceed to keep up the very good operate. I just additional up your RSS feed to my MSN News Reader. In search of ahead to studying more from you afterward!? I’m typically to running a blog and i actually admire your content. The article has really peaks my interest. I’m going to bookmark your site and hold checking for brand new information. 오래된토토사이트

There’s no doubt that, a man or woman until they offer trust, or simply allow individuals trust. Imlil Day Trip

Traffic Mayhem Review- Splendid article post on the blog bro. This amazing is just a completely nicely structured blog post, just the data I was searching regarding. Kudos ไฮโล kingmaker

Spot lets start work on this write-up, I seriously think this amazing site needs far more consideration. I’ll apt to be again to learn to read considerably more, thank you that information. หวยออนไลน์

cheers for dropping this story. I am definitely tired of struggling to find relevant and intelligent commentary on this subject. Everyone nowadays seem to go to extremes to either drive home their viewpoint or suggest that everybody else in the globe is wrong. cheers for your concise and relevant insight. viza canada pentru cetateni romani

Thank you, I have just been looking for information about this subject for ages and yours is the best I’ve discovered so far. But, what about the bottom line? Are you sure about the source? Kennected

I needed to write you that little bit of remark to help give many thanks once again with your striking solutions you’ve featured on this website. It was certainly extremely open-handed of you to grant publicly what exactly most people would have made available as an e-book to generate some profit for themselves, specifically seeing that you could have done it if you considered necessary. Those solutions in addition acted like a fantastic way to realize that some people have similar interest similar to mine to know good deal more related to this condition. I am certain there are some more enjoyable moments ahead for individuals who scan through your site. 土耳其签证要求

Thanks a bunch for sharing this with all folks you really recognise what you’re speaking about! Bookmarked. Kindly additionally discuss with my web site =). We can have a link trade contract among us! poker online

Ha ha… I was just browsing around and took a glimpse at these responses. I can’t believe there’s still this much attention. Thanks for posting about this. 뉴질랜드 비자 온라인 양식

It’s rare to get an expert in whom you may have some confidence. In the world of today, nobody actually cares about showing others the way in this matter. How lucky I am to have now found a wonderful web site as this. It is really people like you who make a genuine difference nowadays through the ideas they discuss. Domanda di visto indiano