Depends where you were last week when the U.S. Department of Energy (DOE) took feedback on its uranium mine leasing program in southwest Colorado. In some places like Telluride, according to media reports, the feds met with stiff resistance. Others, like Montrose, the reaction was more mixed.

In Montrose, near where a Canadian company hopes to build the nation's first new uranium processing mill in decades, the Montrose Daily Press reported a DOE meeting “generated impassioned responses from its defenders and detractors.”

In the nearby ski town of Telluride, according to the Telluride Daily Planet, the DOE “received a sharp mandate from Telluride residents: Any mining is too much, and its leasing program should be disbanded.” 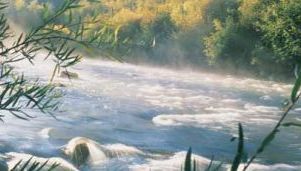 The DOE held a series of meetings to gather public comment on an environmental impact statement it's preparing on a 2007 decision to award or renew 31 uranium mining leases on a 42-square-mile tract of federal land in the Uravan Mineral Belt. The government agreed to a more in-depth analysis after conservation groups filed suit alleging the feds ignored their own National Environmental Policy Act and Endangered Species Act in approving the leases.

Some residents of remote western Montrose County welcome a revival of the uranium mining industry that provided jobs in the 1950s, 60s and 70s. Critics, many from the nearby resort town of Telluride and surrounding San Miguel County, fear a return to the industrial mining days that left a toxic legacy in the region.

Opponents not only want the DOE to reject new uranium mining in the area, they also want past contamination cleaned up.

“Instead of promoting mining when DOE has plentiful uranium stockpiles, the public has requested DOE turn its focus to the environmental and economic benefits that would flow from requiring the immediate and comprehensive reclamation of 13 of the leased tracts,” said Hillary White of Sheep Mountain Alliance. “This would require no federal monies as the reclamation responsibilities must be met by the private companies who leased these tracts.”

As Telluride Town Council member David Oyster spoke out against the leasing program, demonstrators at the Telluride meeting donned black hoods in honor of those killed in nuclear bomb attacks or nuclear accidents. Some of the uranium used in the nation's first nuclear bombs came from the Uravan Mineral Belt in Colorado.

According to the Daily Planet, the lone voice of support for the continuation of the DOE leasing program came from Steve White, director of Montrose County's Planning and Development Department, speaking on behalf of the county commissioners.

“The socioeconomic impact of ULP [Uranium Leasing Program] leases to the region and the nation should be thoroughly examined,” White said. “Furthermore, we ask that DOE create a scope of study which will consider the agency's mission to ‘ensure America's security and prosperity by addressing its energy, environmental, and nuclear challenges.'”

The ULP program includes the renewal of 13 previously active leases that were mined but not reclaimed and 18 new leases and would allow mining for up to 10 years. Critics claim uranium tailings have already fouled the scenic Dolores and San Miguel Rivers, both popular fishing and rafting destinations.

“Pollution from uranium development can be fatal for people, fish and wildlife, and can last for hundreds and even thousands of years,” said Taylor McKinnon of the Center for Biological Diversity. “The Department of Energy works for the public and the public is right to insist on reclamation rather than more uranium pollution. It's time for the government to start listening.”