Rather than seek an appropriate technological solution, managers of a decommissioned uranium processing mill near Cañon City want the state to let them stop testing a radioactive holding pond because wooden pallets used to cross the pond are sinking into the toxic mud.

Environmental attorneys and watchdog citizen groups point out that the company that owns the U.S. Environmental Protection Agency Superfund Cleanup site that's been leaking into local groundwater since the 1950s is Cotter Corp., a subsidiary of General Atomics, which is a division of General Dynamics – the company that makes high-tech Predator Drones. 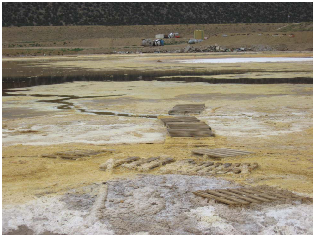 As the Denver Post first reported earlier this month, Cotter officials have asked (pdf) the Colorado Department of Public Health and Environment to allow them to stop testing the pond for acidity. Cotter is in the process of dismantling the old mill, although at one point recently the company was considering re-starting operations there. Now the facility is the subject of ongoing litigation.

“The attached photos will indicate the problems getting to and the distance from the water,” a CDPHE official wrote in a July 21 report (pdf) on the situation. “Personnel have used pallets to provide a stable walking and work platform but the pallets are now at least two deep and continue to sink into the mud. It is my opinion that accessing the ponds edge is no longer safe.

“With the pallets continuing to sink and the stability of the ground it is recommended that personnel discontinue the practice of taking pH measurements in the Primary Impoundment.”

Travis Stills, an attorney with the Durango-based Energy Minerals Law Center, points out that these are the same state regulators who will oversee the proposed new Piñon Ridge Uranium Mill that the Canadian company, Energy Fuels, wants to build in western Montrose County.

“Basically, the judgment of the nuclear fuels industry and its captive regulators in Colorado is not to be trusted when it comes to matters of health, safety, and a clean environment,” Stills said in an email. “[Coloradans Against ToxicWaste], without the benefit of attorneys, examined Cotter in 2005 to establish the importance of monitoring and maintaining pH levels to stabilize the tailings and prevent further deterioration of the liners.”