Vail basking in springtime after last week's Arctic blast, but ski season has to stretch until late April

RealAspen News and Community Content Feed
By David O. Williams
Real Aspen – February 15, 2011
Olympic gold medalist Ted Ligety, of Park City, Utah, writing from the 2011 FIS World Alpine Ski Championships in Garmisch on Monday, wonder aloud in today's Denver Post what many of us here in Colorado have been scratching our heads about this week: What happened to winter?

Here's his lead from today's column: “GARMISCH-PARTENKIRCHEN, Germany — The snow conditions have been a big part of the story here at the world alpine championships. It was 53 degrees when I left the finish area after the men's super-combined Monday, and I was in a T-shirt all day.”

Well Ted, it was 50 degrees when I drove into Edwards Monday afternoon to pick up my kids from school. Edwards is at about 7,000 feet in elevation. You can see the ski slopes of Arrowhead, which are connected to Beaver Creek, where you won a World Cup race in December. It's hot all over.

Just last week we were at the tail end of a five-day snow cycle in the Vail Valley that dumped 41 inches of new snow and gripped the area in bitter cold temperatures. I have the patches of frost nip on my cheeks to prove it (when the snow is that good on the hill, you simply don't stay inside, no matter how cold it is). But now we're broiling in full-on springtime. 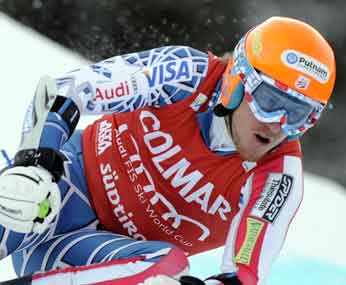 A week ago we were skiing in five-below temps. This week Vail is basking in the mid-40s. That's a 50-degree temperature swing, and those kind of wild fluctuations are what some climate scientists believe best typify global climate change. It's not that we never have cold temperatures or snow (which actually can be more abundant in warmer temps), it's that we don't see the kinds of long, sustained cold snaps that can do things like kill of mountain pine park beetles.

A lot of politicians, including the Republican members of Colorado's congressional delegation, believe climate change is not statistically significant enough to make the financial sacrifices necessary to diversify the nation's power supply and move toward cleaner-burning fuel sources. They're battling to keep the EPA from regulating greenhouse gas emissions under the Clean Air Act.

Former Republican Colorado Congressman Bob Schaffer, a U.S. Senate candidate who lost to Democrat Mark Udall in 2008, tweeted this during the last big snowstorm to hit Denver and the Front Range: “Colorado school's shut down 2nd day in a row due to weather. How will kids learn about global warming if they're not in school?”

The kids can actually learn a lot from ski racers like Ligety, or just people who live in mountain communities. When you chase snow for a living, you see climate change at work on a daily basis. Even as certain species have to move to higher and higher elevations to find cooler temps in order to survive, winter resorts at lower elevations in the Alps and other parts of the world are becoming less and less viable.

“The weather is no surprise, because Garmisch typically has warmer conditions,” Ligety wrote. “It's at a low altitude — the downhill drops from 5,545 feet above sea level to 2,526 feet — and it's located right where the mountains start. Ten kilometers outside of town, it's dead flat.

“The hills are cool, and Garmisch has a great racing history and tradition, but there always seem to be questionable conditions.”

Ligety told me much the same about Whistler after last year's Winter Olympics, and he politely questioned holding the next Games at a somewhat low-elevation coastal venue like Sochi, Russia, in 2014. He said there will clearly be challenges that racers and course workers likely would not face at higher elevations in areas like the interior American West.

As I was riding a chairlift in the frigid temps last week at Vail (top elevation more than 11,000 feet), huddled deep down into my neck gator and counting the seconds until I could warm myself back up by skiing again, I overheard my fellow passengers speculating on whether the abundant snowfall (322 inches at Vail so far this season) would prompt the ski company to stay open longer.

I laughed to myself because I've been living in Vail 20 years now and know that things can turn on a dime. We have had amazing snow seasons suddenly end in early March before winter is even officially over. And last season it was dry and warm most of the season until it started snowing on April 1 and then seemingly didn't stop until June.

Generally, though, the trend has been toward shorter ski seasons on either end, and this season will be a real test given that Easter Sunday – a huge ski vacation holiday for key Latin American markets – falls so late on the calendar.

Vail is keeping its fingers crossed and hoping we can make it till Sunday, April 24. And if it's not like last year, with plenty of late-season snow, at least we'll have lots of free music to divert everyone's attention from looming golf and beach weather.

The free Spring Back to Vail concert series will start on Friday, April 15, and run through that closing day on Sunday, April 24. Ten days and nights of free music and events in Vail to wrap up what has already been a stellar season in Vail. Hopefully we'll go out with a bang like last season and not the more common whimper we've seen the past few years.

15 Comments on "Vail basking in springtime after last week's Arctic blast, but ski season has to stretch until late April"

Thank you for sharing this blog which was good and the writing skills of the professional copywriter is amazing as we all know that ski season forwards towards the mid of April which is also my birthday month I am definitely going to watch this event after making blog content strategy UK for businesses clients which I have to complete before the deadline to see this Olympics ski season live with my family.

Undoubtedly this is an excellent article, I gained a lot of knowledge after reading good luck. The theme of the blog is excellent, there is almost everything to read game guides the impossible quiz

This article is great got much information from this thanks for sharing this wonderful information. I want to Introduce our cheap content writer

A long time ago, the Dissertation Writing Service demonstrated its reliability. It has been providing original, plagiarism-free for over ten years, and it continues to get better every day.https://www.helpwithdissertation.co.uk/write-my-dissertation-proposal/

If you’re looking to replace your furnace, heating system or air conditioner, we can help with that. Our professional technicians will guide you through the process of choosing a new unit and furnace installation it properly. This includes making sure all necessary permits are obtained and filing any applicable paperwork with your city or county government before beginning work on your home.

In our FULL FORCE blend (previously named IGNITION) you will find premium South American and South Asian Fresh coffee beans specifically blended for espresso. Ignite your day with this 'must have' crema rich blend. You need to add it to your arsenal of beans because it is so delicious that there's no doubt it's a lethal weapon!

We are a full-service printer diyprinting.ca serving North America since 2001. Our goal is to make it easy and simple for you to create stunning business stationery and promotional pieces that will effectively present your image and help you communicate proficiently. We have designed a customizable online template with many sample designs to help you in this process and create your own designs and we will print them and ship them directly to your house or business

if you and your fiancé like rings at different stores, buy your rings where you like. Juwelier Steiermark

you have answered incorrectly helps to expose the weak points in your knowledge and hence - define the next steps in your training effort. comprare patente di guida

Everyone loves pork rub, right? Bacon, ribs, chops. Of course we do. We’re Canadian! And you don’t get much more Canadian than hog-meat marinated in maple sugar, combined with demerara sugar and a kickass blend of spices. Pro tip; if you want to fly your freak flag high, try pan-frying it on high heat to caramelize the sugar. Go hog-wild, your friends will thank you! Ingredients: 100% Pure Canadian Maple Sugar, Garlic, Demerara Sugar, Kosher Salt, Onion, Smoked Paprika, Cinnamon, Spices.

I am a passionate digital marketer who is able to deliver complete marketing solutions to businesses. Marketing to lead management.
Visit: https://logovent.com

I am a passionate digital marketer who is able to deliver complete marketing solutions to businesses. Marketing to lead management.
Visit: https://logovent.com

A couple can choose to include an invocation or poem that can be just as meaningful to them as a prayer is to a religious person. This ceremony is also known as a court house, notary, JP or Justice of the Peace ceremony. best officiant