RealAspen News and Community Content Feed
By David O. Williams
Real Aspen – November 5, 2012
Editor's update on Friday, Feb. 1: So Vail this morning reported 6 new, with 1 overnight and 27 inches in the last week. On Thursday, Jan. 31, Vail reported 9 new (4 overnight), so that's just 9 inches on Thursday. Those numbers don't quite add up to what I skied on Thursday (maybe it just seemed deeper because we've been so snow-starved of late). Opensnow does a good job of explaining what happened, saying that a lot of it had to do with wind-loading. Suffice to say, it was really good on Thursday. Still, Vail has had just 140 inches season to date and averages 350, so we need more than 200 inches just to reach average totals. That could happen in February, March and April -- typically our snowiest months. Stay tuned.

Original post on Thursday, Jan. 31: It was absolutely sick out there on Vail Mountain Thursday – by far the best day since the now legendary season of 2010-11.

Vail only reported 9 inches at 5:30 a.m. (just 4 overnight), but it must have snowed 8-10 inches between then and when I got on Gondola One at 9 a.m., because there was a legit foot and half to two feet in the Back Bowls.

It’s been a long time since I’ve straight-lined Widge’s with powder piling up over my thighs and into face while I’m trying to simultaneously laugh, yell and breathe. But that was my first run this morning. Followed by Wow, Headwall, Genghis, Genghis, Genghis, Over Yonder and a frontsider back to reality (Zot to Arena to Spruce Face to International ... sorry Lindsey). 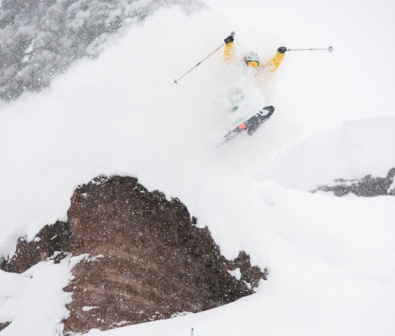 Pat Baskins sails off a rock on Vail's North Rim trail on Thursday.
Connor Walberg, Vail Resorts
That’s about 14,500 vertical and a whole new perspective on a ski season that was only slightly outperforming the high and dry and highly forgettable 2011-12 season until now. Since last Thursday Vail has been hit with what has to be more than 30 inches of new snow, although officially they were only claiming 23 in the last seven days after under-reporting with 9 on Thursday. That will be updated significantly with Friday’s report.

There were comments like “best run ever,” “never skied anything that good before,” and “I’ve been waiting for that for two seasons” being thrown around in the lift lines on Thursday. And there’s no question this was a game-changer.

It came after an 8-inch quasi-powder day on Tuesday, when I punished myself with 17 lift rides and nearly 27,000 vert. That’s what pent-up powder aggression can do to you.

The lack of snow since Christmas was glaring, especially after such a dry November. Good snow in December turned things around quite a bit, but then it got dry again in January. And we’re still way below average annual snowfall amounts, but the last week has gone a long way toward once again turning around another sub-par season. Was it really only two seasons ago that Vail broke its all-time snowfall record with 525 inches? Seems like a lifetime ago.

Meteorologist ski writer Joel Gratz actually called for the snow to wind down around sunrise Thursday, which is about when the snow machine really kicked into high gear in Vail, but he did accurately predict it would be the best day of the season so far – and there’s no doubt he nailed that forecast.

Now it looks like things get sunny and warm for the weekend and into next week, with the next storm heading in toward the middle or end of next week. Let’s all hope that pans out and we don’t drop back into another three-week dry cycle. Those, frankly, suck. And nothing sucked about the skiing this week at Vail. You might even say it was epic.

I love the efforts you have put in this, appreciate it for all the great posts. สูตรบาคาร่า 2021

Hi, best wishes to you and your very nice blog,    Forett Showflat

I think that may be a fascinating element, it made me suppose a bit. Thanks for sparking my thinking cap. Every now and then I get such a lot in a rut that I just really feel like a record. new jersey addiction detox

This must be done in a deep freeze as a standard refrigerator freezer combo doesn't get to a low enough temperature for a long enough period of time. Buy raw cotton online

I don’t normally comment but I gotta tell appreciate it for the post on this great one : D. inspirational quotes

Thank you a lot for sharing this with all people you really realize what you are talking about! Bookmarked. Kindly also consult with my web site =). We could have a link alternate arrangement between us! insurance slidell la

There are actually surely a lot of details like that to take into mind. That is a great point to bring up. I provide the thoughts above as general inspiration but clearly you will find questions like the one you bring up exactly where the most necessary thing will certainly be working in honest very good faith. I don?t know if best practices have emerged around things just like that, but I am certain that your job is clearly identified as a fair game. optimum utilization of resources

I feel like I've come all the way here, but I don't regret the moment I came back. I've learned a lot of knowledge. I'm so happy to know useful information메이저사이트

Splendid post. I discover new things upon different weblogs daily. Couple of stimulating to see content using their company authors and turn out to be acquainted with a small something their particular. I’d think to use some inside the information on my blog need to do not thoughts. Obviously I’ll provides a link back up in internet site. Thank you sharing. wholesale dog supplies

Poker-online is usually an excellent Match but it is important to educate yourself on the Suggestions. room reservation software

Wow! This can be one particular of the most beneficial blogs We’ve ever arrive across on this subject. Basically Wonderful. I’m also a specialist in this topic so I can understand your effort. cheap youtube smm panel

This web-site is actually a walk-through it really is the info you wished with this and didn’t know who must. Glimpse here, and you’ll definitely discover it. youtube smm panel

Hello! Someone in my Myspace group shared this website with us so I came to take a look. I’m definitely loving the information. I’m bookmarking and will be tweeting this to my followers! Terrific blog and outstanding style and design. cheap smm