Lest you start believing the right-wing rhetoric that modern terrorism dictates the steady rollback in civil liberties we've seen since 9/11, give Hoop's story a good read. It's a terrifying cautionary tale about government run amok in the name of national security. 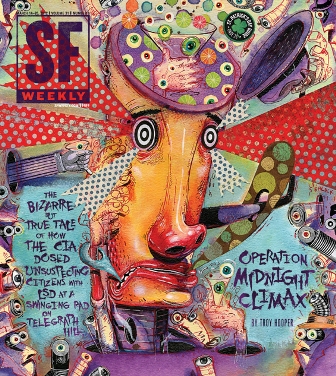 And the best part is the name given the testing program, which included at least three brothels where agents watched johns unknowingly dosed with LSD freaking out: “Operation Midnight Climax.”

The program was exposed decades ago by groundbreaking investigative journalist Seymour Hersch, whom Donald Rumsfeld and Dick Cheney later wanted to bring up on charges for revealing sensitive national secrets, but Hooper delves into new details unearthed about the covert program's operations in San Francisco, including an interview with a former U.S. marshal who was allegedly victimized by the CIA.

Go to the San Francisco Weekly website to read the full article.

The fnf mods game encapsulates all the enjoyment, and once you start playing it, you won't be able to quit since you'll become addicted.