RealAspen News and Community Content Feed
By David O. Williams
Real Aspen – November 11, 2011
With a little over a week to go until Vail opens for the 2011-12 ski season, people all over the world are starting to wonder what they can expect in terms of both early-season and long-term snow conditions. They want to know if Vail will enjoy anything close to the record amount of snowfall that we saw last season.

When the emails land in my inbox, I have to be honest. I have absolutely no idea.

So far, so good, but the lifts aren't running, so who cares? Well, the storms that have blown through the Vail Valley every four or five days so far this fall have guaranteed us at least one thing. Ski conditions on opening day, Friday, Nov. 18, and for Thanksgiving weekend, Nov. 26-27, will be above average. 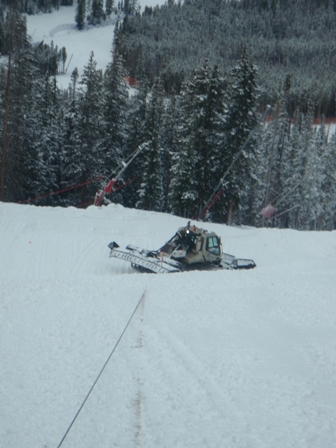 A winch cat works in both natural and man-made snow on the Birds of Prey downhill course at Beaver Creek this week (Jodi Peterson/Vail Resorts).

That means Vail will not open with just one run (Born Free trail in Lionshead) as it sometimes does. In fact, resort officials Thursday announced snowmaking crews have been "killing it," and that Vail will open with skiing out of both Lionshead (Chairs 8, 15 and the Eagle Bahn Gondola) and Vail Village (the Vista Bahn). That's big.

More terrain, they say, will open as snow conditions permit, so go to www.vail.com for up-to-date terrain openings and snow conditions. And the National Weather Service has issued a Winter Storm Watch for this weekend in the Vail Valley, so go to your favorite forecaster if you want more detailed predictions.

I use a trusted meteorological source in Boulder – a writer and Web wit named Joel Gratz – who runs a website called www.opensnow.com. He is usually fairly accurate in forecasting how much powder will sift down from the skies for the snow-riding pleasure of local, Colorado and global skiers and snowboarders. And the trend now is for people to storm watch and book trips at the last minute.

Short term, Gratz says a couple of storms will roll through this weekend, making for timely openings at Breckenridge (50th anniversary this season) today and Winter Park on Saturday – four days ahead of schedule.

With Breck open, three of the five Colorado mountains on Vail Resorts' Epic Pass season ski pass ($669 through Nov. 29) will be up and running, including Arapahoe Basin and Keystone. Vail and Beaver Creek (opening Wednesday, Nov. 23) are the other two.

Beaver Creek on Thursday announced it will extend its season by a week, now closing on Sunday, April 15, and Snowmass announced it will open five days early on Saturday, Nov. 19, with 160 acres of terrain (including the Big Burn).

Long-term, Opensnow's Gratz says this ski season is shaping up like a second straight La Niña year, and that in consecutive years of the Pacific weather pattern, the second year is usually a little weaker. Hard to imagine it would be stronger given the record 525 inches of snow that fell on Vail last season (more than 43 feet!).

Still, things are looking very promising so far. Some seasons we have had literally no snow at this point. So the amount of natural snow, plus the accompanying colder temperatures ideal for snowmaking, means we will have a good early season.

Now what can you expect if you come to town for Thanksgiving or early December? You should not expect the Back Bowls to be open – unless we get some whopper storms – and you should generally expect a lot of quality cruiser runs to be open on the front side of Vail.

You also should expect a generally uncrowded and pleasant experience, with a smattering of really good dining, retail and transportation deals. Time it for early December and you'll be able to watch the world's best male ski racers descend the daunting Birds of Prey downhill course during World Cup action Dec. 2-4. Or the flowing weekend check out free concerts in Vail by big-name acts like Jakob Dylan when Vail Snow Daze returns Dec. 5-11.

But besides somewhat limited terrain, you should also sometimes expect spotty staffing. Hotels, restaurants and even the local ski mountains haven't fully staffed up until mid-December. Generally, though, you won't notice much of a difference, and the smaller crowds and better deals more than make up for any inconvenience.

I love this time of year, before the crazed holiday period, and if the snow conditions warrant it, I always recommend an early-season visit.

I think this is an informative post and it is very useful and knowledgeable. therefore, I would like to thank you for the efforts you have made in writing this article. crack streams

It was a very good post indeed. I thoroughly enjoyed reading it in my lunch time. Will surely come and visit this blog more often. Thanks for sharing. 123 movies

Good post but I was wondering if you could write a litte more on this subject? I’d be very thankful if you could elaborate a little bit further. Appreciate it! https://docs.google.com/spreadsheets/d/1ntiogcbDulo3Vl9Htd7Jl9Xy-2kUp7-F33vbQ4q67Uc/edit#gid=409280497