RealAspen News and Community Content Feed
By David O. Williams
Real Aspen – September 22, 2011
Colorado's future looks extremely hot and dry if current climate trends continue, and the city of Boulder is being proactive in planning for more drought conditions, less water and a relatively crispy climate outlook all along the state's Front Range in coming years.

Prompted by severe drought conditions in 2002 that forced the city of just under 100,000 residents to implement tight water restrictions, Boulder teamed up with water experts and climate scientists from the National Oceanic and Atmospheric Administration (NOAA) to produce a new report entitled “The Potential Consequences of Climate Change for Boulder Colorado's Water Supplies (pdf).”

“The Boulder water supply study highlights the inextricable connection between climate science and water management by providing climate scientists and water resource professionals with an opportunity to share their respective knowledge and translate it into the practical applied information -- information that engineers and water managers need to plan for the future,” according to a NOAA article on the report. 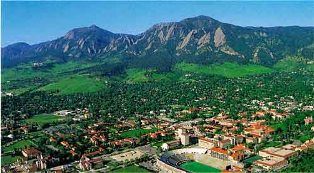 Boulder officials are now fast-tracking funding for water infrastructure projects, including a new water pipeline that will give the city more options for potential water sources and a dam rehabilitation project to enhance the city's water storage capacity.

Boulder and all of Colorado just experienced the hottest August ever, according to NOAA. So did fiver other states – New Mexico, Louisiana, Texas, Oklahoma and Arizona – and the average temperature in the United States in August was 3 degrees Fahrenheit higher that the long-term average between 1901 and 2000. Precipitation nationwide was .29 inches below the long-term average.

These statistics will no doubt provide ammo for supporters of two ballot questions in Boulder's Nov. 1 municipal election asking voters to essentially approve a new municipal electrical utility. Proponents of the plan to kick Xcel Energy to the curb say the state's largest utility is not shedding coal-fired power quickly enough.

More than half the electricity used in Boulder is generated by burning coal, which spews twice as much carbon dioxide as natural gas and up to 100 percent more CO2 than alternative energy sources like wind and solar. CO2 is the main component of greenhouse gases blamed for climate change, and Boulder officials have a goal of reducing those emissions to 1990 levels by 2012.

Xcel is on track to reach a state-mandated goal of producing 30 percent of its electricity using renewable sources by the year 2020, but coal will still make up 48 percent of the utility's power load.

The city of Boulder, where the mayor last year tied the devastating Fourmile Canyon Fire to climate change, is betting voters will prefer municipal management to the ongoing and heavy investment by Minnesota-based Xcel in new coal-fired power plants like Comanche 3 near Pueblo.

In July, Standard and Poor's upgraded outstanding bonds on Boulder's water, wastewater and storm drainage bonds from AA+ to AAA.

“With this AAA bond rating, Boulder places itself among the elite in the public sector,” City Manager Jane Brautigam said at the time. “This is a testament to our utilities' sound fiscal policy and management practices as well as its strong outlook for future success and excellence in service delivery.”

Xcel, on the other hand, recently saw Fitch Ratings assign a BBB+ rating to its issue of $250 million in notes. According to the Associated Press, Fitch was concerned about “Xcel's capital expenditure program of approximately $2.6 billion per year through 2015.”

Editor's note: By 2020, Xcel projects it will produce 48 percent of its electricity from coal, 30 percent from renewable sources such as wind and solar, and 22 percent from natural gas. That is not a "vast majority" from coal, as this article previously claimed. Also, the bond rating standards for a public corporation are more stringent than for municipalities.
RealAspen News and Community Content Feed

I would like to thank you for the efforts you have made in writing this article. I am hoping the same best work from you in the future as well.. https://www.btpwbt.com/

I would like to thank you for the efforts you have made in writing this article. I am hoping the same best work from you in the future as well.. https://www.btpwbt.com/

I think it could be more general if you get a football sports activity https://www.bentoncityedc.org/

I adore your websites way of raising the awareness on your readers. https://www.beautyconceptsmyanmar.com/

This was among the best posts and episode from your team it let me learn many new things. http://www.trilliumdentalclinic.com/

This post is very simple to read and appreciate without leaving any details out. Great work! https://www.thefloorcare.com/

Wonderful illustrated information. I thank you about that. No doubt it will be very useful for my future projects. Would like to see some other posts on the same subject! https://www.metallurgaluminium.com/

I can see that you are an expert at your field! I am launching a website soon, and your information will be very useful for me.. Thanks for all your help and wishing you all the success in your business. https://www.lcdayofcaring.org/

I found Hubwit as a transparent s ite, a social hub which is a conglomerate of Buyers and Sellers who are ready to offer online digital consultancy at decent cost. https://www.lancasterpacontractors.com/

They're produced by the very best degree developers who will be distinguished for your polo dress creating. You'll find polo Ron Lauren inside exclusive array which include particular classes for men, women. http://www.hvac-tab.com/

so happy to find good place to many here in the post, the writing is just great, thanks for the post. https://www.healthyhomewisconsin.com/

A good blog always comes-up with new and exciting information and while reading I have feel that this blog is really have all those quality that qualify a blog to be a one https://dorsetastro.org/

Nice information, valuable and excellent design, as share good stuff with good ideas and concepts, lots of great information and inspiration, both of which I need, thanks to offer such a helpful information here. https://curiousoysterseminars.com/

Mmm.. good to be here in your article or post, whatever, I think I should also work hard for my own website like I see some good and updated working in your site. https://www.confluencecreativeartscenter.org/

Wow! Such an amazing and helpful post this is. I really really love it. It's so good and so awesome. I am just amazed. I hope that you continue to do your work like this in the future also. https://www.computerassistedreporting.com/

Thanks for sharing this information. I really like your blog post very much. You have really shared a informative and interesting blog post with people.. https://www.web-design-ru.com/

I am a new user of this site so here i saw multiple articles and posts posted by this site,I curious more interest in some of them hope you will give more information on this topics in your next articles. https://www.treesforeducation.com/

Welcome to the party of my life here you will learn everything about me. https://thegreaterbay.co/

Really nice and interesting post. I was looking for this kind of information and enjoyed reading this one. Keep posting. Thanks for sharing. https://www.startingyourveryownbusiness.com/