RealAspen News and Community Content Feed
By David O. Williams
Real Aspen – September 15, 2011
Members of the Colorado Water Conservation Board (CWCB) Wednesday voted to spend an initial $72,000 to form a task force to study the feasibility of two separate proposals to pipe water out of the Green River in southwest Wyoming to Colorado's Front Range.

At a meeting in Grand Junction, the CWCB reportedly indicated there could be more money available for more detailed analysis of the two so-called Flaming Gorge Pipeline proposals if the initial study demonstrates some feasibility.

Conservation groups, pointing to an initial state analysis showing the project could cost between $7 billion and $9 billion, say spending any taxpayer money on the project is a waste of scarce state resources and that the project would result in the most expensive water in state history and environmental degradation of the Green and Colorado River basins. 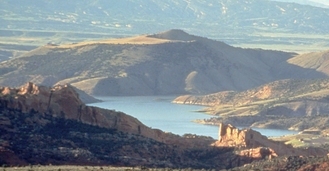 Stakeholders had been seeking considerably more money and more task force meetings to examine the proposals.

“We are encouraged that the state will waste less taxpayer money on this study, but we still think it's a complete waste of time and money even in its watered-down form,” said Gary Wockner of Save the Colorado.

“The pipeline would irrevocably harm the Green and Colorado Rivers, cost up to $9 billion, and negatively impact the West Slope's economy. The state should spend the public's money elsewhere.”

Fort Collins businessman Aaron Million first floated the private pipeline concept in 2007, arguing Colorado has the right to divert up to 250,000 acre feet a year from the Green River just below Flaming Gorge Reservoir because the river briefly swings through Moffat County in western Colorado before flowing into the Colorado River in Utah.

“We've been watching from the sidelines,” Million told the Denver Post. “The project needs to be studied. This is a move-forward decision.”

However, an independent economic study indicates the project could devastate the tourism and outdoor recreation economy of the region. Other critics say the task force work should not proceed until federal regulators can determine how much Colorado River water will even be available to the state under certain climate change or drought scenarios.

“Those are fundamental questions that the Bureau of Reclamation and others are in the process of answering right now, and we really believe that those questions should be answered before we fund a process to look at the process,” Stacy Tellinghuisen, senior energy water policy analyst for Western Resource Advocates, told the Colorado Independent.

“And what are the ripple effects? If we develop this huge new chunk of water for the Front Range, does that mean that the West Slope no longer has the opportunity to develop water for its own use?” she added. “Those are questions that need to be answered but probably aren't going to be answered by this task force.”

Hey what a brilliant post I have come across and believe me I have been searching out for this similar kind of post for past a week and hardly came across this. Thank you very much and will look for more postings from you. MayUmbaNationalpark

Great job for publishing such a beneficial web site. Your web log isn’t only useful but it is additionally really creative too. voyancemargot.com

Three are usually cheap Ralph Lauren available for sale each and every time you wish to buy. jewellery

Wow i can say that this is another great article as expected of this blog.Bookmarked this site.. best potty training seats

it was a wonderful chance to visit this kind of site and I am happy to know. thank you so much for giving us a chance to have this opportunity.. Gestion d'entreprise

I like your post. It is good to see you verbalize from the heart and clarity on this important subject can be easily observed... interior design course online

I wanted to thank you for this great read!! I definitely enjoying every little bit of it I have you bookmarked to check out new stuff you post. https://startupo.fr/course/204/

Your work is truly appreciated round the clock and the globe. It is incredibly a comprehensive and helpful blog. lifeguard Training

This is such a great resource that you are providing and you give it away for free. I love seeing blog that understand the value of providing a quality resource for free. prodentim review

I found so many interesting stuff in your blog especially its discussion. From the tons of comments on your articles, I guess I am not the only one having all the enjoyment here! keep up the good work... who is calling me from this number

I’m going to read this. I’ll be sure to come back. thanks for sharing. and also This article gives the light in which we can observe the reality. this is very nice one and gives indepth information. thanks for this nice article... ortaklığın giderilmesi davası

Great article Lot's of information to Read...Great Man Keep Posting and update to People..Thanks catchy names for a fitness business

A very awesome blog post. We are really grateful for your blog post. You will find a lot of approaches after visiting your post.forex trading course reviews

Weight loss might be a difficult journey. However, when you know what to do, it becomes simpler.forex live signals

Thanks for taking the time to discuss this, I feel strongly that love and read more on this topic. If possible, such as gain knowledge, would you mind updating your blog with additional information? It is very useful for me. credit card processing agent programs

If you are looking for more information about flat rate locksmith Las Vegas check that right away. bola online

Thanks for picking out the time to discuss this, I feel great about it and love studying more on this topic. It is extremely helpful for me. Thanks for such a valuable help again. Best Product

Everything has its value. Thanks for sharing this informative information with us. GOOD works! how to sell merchant services

I can’t imagine focusing long enough to research; much less write this kind of article. You’ve outdone yourself with this material. This is great content. ΔΙΑΔΙΚΤΥΑΚΗ ΑΙΤΗΣΗ ΒΙΖΑ ΝΕΑΣ ΖΗΛΑΝΔΙΑΣ

Attractive, post. I just stumbled upon your weblog and wanted to say that I have liked browsing your blog posts. After all, I will surely subscribe to your feed, and I hope you will write again soon! U.S. VISA FOR MEXICO CITIZENS

An fascinating discussion is value comment. I think that it is best to write extra on this matter, it won’t be a taboo topic however generally people are not enough to talk on such topics. To the next. Cheers Wiza biznesowa dla Indii

Thank you very much for writing such an interesting article on this topic. This has really made me think and I hope to read more. North American Bancard Sales Partner

I have read your article, it is very informative and helpful for me.I admire the valuable information you offer in your articles. Thanks for posting it.. US VISA FOR SLOVENIAN CITIZENS

I am very enjoyed for this blog. Its an informative topic. It help me very much to solve some problems. Its opportunity are so fantastic and working style so speedy. ZÍSKAJTE OFICIÁLNE INDICKÉ VÍZUM

Today, I was just browsing along and came upon your blog. Just wanted to say good blog and this article helped me a lot, due to which I have found exactly I was looking. วีซ่าแคนาดาออนไลน์

I definitely enjoying every little bit of it. It is a great website and nice share. I want to thank you. Good job! You guys do a great blog, and have some great contents. Keep up the good work. 壯陽藥

I think this is an informative post and it is very useful and knowledgeable. therefore, I would like to thank you for the efforts you have made in writing this article. imr 4350 8 pounds

Cool stuff you have got and you keep update all of us. Visa Perniagaan India

I wanted to thank you for this excellent read!! I definitely loved every little bit of it. I have you bookmarked your site to check out the new stuff you post. https://termpapermaster.com/buy-term-paper-online/

Thank you because you have been willing to share information with us. we will always appreciate all you have done here because I know you are very concerned with our. bwclub88

Thank you because you have been willing to share information with us. we will always appreciate all you have done here because I know you are very concerned with our. dalat milk

I’ve been surfing online more than 5 hours today, yet I never found any interesting article like yours without a doubt. It’s pretty worth enough for me. Thanks... ÚJ-ZÉLANDI ÜZLETI VÍZUM

It was wondering if I could use this write-up on my other website, I will link it back to your website though.Great Thanks. CANADA ZAKELIJK VISUM

I would like to say that this blog really convinced me to do it! Thanks, very good post. เว็บพนันออนไลน์

It is a fantastic post – immense clear and easy to understand. I am also holding out for the sharks too that made me laugh. 加拿大簽證問題

Hi there! Nice material, do keep me posted when you post something like this again! I will visit this blog leaps and bounds for more quality posts like it. Thanks... INDIAN NØDVISUM

This is a great inspiring article.I am pretty much pleased with your good work.You put really very helpful information. Keep it up. Keep blogging. Looking to reading your next post. အွန်လိုင်းကနေဒါဗီဇာ

There are particular dissertation online sites over the internet if you ever buy of course proclaimed in the site. Seismic piping stress company

Usually there are some dissertation sites making use of the website whenever you develop into in plain english reported in the site. Turska viza odbijena

I wanted to thank you for this great read!! I definitely enjoying every little bit of it I have you bookmarked to check out new stuff you post. cioccolato di Modica