“This decision can't be defended scientifically or economically,” Dr. Brian Moench told the Colorado Independent. “The public health consequences of this pollution have tremendous economic repercussions, and it's all negative. So we're bewildered by it; we're extremely disappointed.”

Moench is president of the Utah Physicians for a Healthy Environment, which represents about 200 doctors in Utah. He said the proposed EPA standards that Obama rejected weren't even adequate to curtail rising respiratory diseases, especially in cities like Denver and Salk Lake City that suffer from winter air inversions and high levels of ground-level ozone. 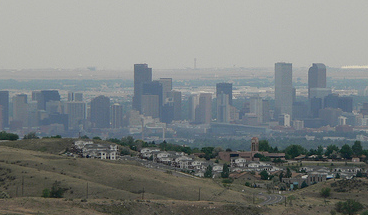 “We get it even worse than you do,” Moench said of Denver's infamous winter brown cloud. “For a typical winter [Salt Lake City will] have the worst pollution in the country at least for an average of four to six days a year, so it's a big issue for us.”

“Any time you impair a community's quality of life, you're going to have adverse economic repercussions,” he said. “People don't want to live where pollution's higher. Real estate values go down. It's harder to bring or stimulate new business and bring clean sources of new employment to an area that suffers from severe pollution, and Salt Lake City has that problem.”

So does Denver and the Front Range of Colorado.

Four out of eight Front Range counties included in the 2011 American Lung Association of Colorado's State of the Air Report received failing grades for ozone pollution and none received a grader higher than a “C.”

“This decision by the Obama Administration to drop science-based ozone standards is clearly a win for big polluters and a loss for our health and the health of children,” Pete Maysmith, executive director of Colorado Conservation Voters, said in a release. “Colorado's air is at dangerous levels, and now is not the time to give in to the demands of the polluters; it's time for leadership.”

In 2008, the Clean Air Scientific Advisory Committee (CASA), an independent group of scientists that advises the EPA, had recommended compelling states and counties to enforce an ozone level of 60 to 70 parts per billion compared to the currently enforced level of 75 parts per billion that was set under the Bush administration.

EPA administrator Lisa Jackson earlier this year announced her agency would seek to impose the lower standard ahead of a scheduled review in 2013.

President Obama, in announcing his decision Friday, referenced that 2013 review: “Work is already underway to update a 2006 review of the science that will result in the reconsideration of the ozone standard in 2013. Ultimately, I did not support asking state and local governments to begin implementing a new standard that will soon be reconsidered.”

Coupled with a dismal August jobs report on Friday, industry representatives praised Obama's call on Jackson to pull back the more restrictive regulations. Ground-level ozone is formed by emissions from vehicles, factories and power plants interacting with sunlight and creating smog, which can contribute to a number of different respiratory diseases.

“The president's decision is good news for the economy and Americans looking for work,” American Petroleum Institute President and CEO Jack Gerard said in a prepared statement. “EPA's proposal would have prevented the very job creation that President Obama has identified as his top priority.

“Ozone levels and air quality continue to improve under current regulations and our industry is committed to making the air we all breathe cleaner while creating new jobs.”
Moench vehemently disagrees.

“Every single study that's even been done suggests that pollution control actually, invariably is an economic stimulus in that it creates jobs in the construction industry, engineering, in technology and in the past, historically, the United States has been able to export some of that technology to the rest of the world,” he said.

And he added that many residents of the Rocky Mountain West have indicated they want greater regulation of air and water quality. Several polls in recent months back up that contention.

“We're even questioning whether [Obama's decision] makes sense politically, because almost every single poll that's been done in the last year to a year and a half suggests that even during our economic downturn most of the people in this country don't want the environment sacrificed in the name of economics,” Moench said.

Doctors and conservation groups in the Rocky Mountain region are expressing outrage with President Obama on Thursday for delaying tougher smog standards. We are offering you https://www.wellingtondemolition.co.nz for the managing the concrete. The Obama administration announced this week that it was pushing back by a year the compliance target for smog pollution standards to give flexibility to local governments and businesses.

Environmental groups and health experts said the new standard puts many people at risk of breathing in unhealthy levels of ozone a key component of smog and could lead to thousands of additional cases of asthma attacks and other respiratory ailments each year in cities across America. You should try https://masterbundles.com/templates/presentations/powerpoint/colorful/ source for beautiful templates that can be used in PPT Files.

Environmental groups and health experts said the new standard puts many people at risk of breathing in unhealthy levels of ozone a key component of smog and could lead to thousands of additional cases of asthma attacks and other respiratory ailments each year in cities across America. You should try [url=https://masterbundles.com/templates/presentations/powerpoint/colorful/]https://masterbundles.com/templates/presentations/powerpoint/colorful/[/url] source for beautiful templates that can be used in PPT Files.

Environmental groups and health experts said the new standard puts many people at risk of breathing in unhealthy levels of ozone a key component of smog and could lead to thousands of additional cases of asthma attacks and other respiratory ailments each year in cities across America. You should try https://masterbundles.com/templates/presentations/powerpoint/colorful/ source for beautiful templates that can be used in PPT Files.