RealAspen News and Community Content Feed
By David O. Williams
Real Aspen – September 1, 2011
U.S. Sen. Michael Bennet is getting in on the Denver 2022 Winter Olympic act, pushing for swift resolution to a dispute between the International Olympic Committee (IOC) and the United States Olympic Committee (USOC) over revenue sharing.

“It is my understanding that the USOC has decided to withhold submitting any bids to host the Olympics until an agreement over revenue sharing can be reached with the IOC,” the Colorado Democrat wrote in a letter today to Larry Probst, chairman of the USOC board of directors.

“State and local officials in Colorado will find it difficult to advance preparations for a possible bid without a sense of certainty that the USOC would be willing to move forward. A timely resolution to this matter would only serve to benefit American cities considering a bid to serve as a host city to a future Olympic Games.”

Officials in the Reno-Lake Tahoe area reportedly are also interested in hosting the 2022 Games. Squaw Valley hosted the Winter Olympics in 1960.

In the wake of last weekend's successful USA Pro Cycling Challenge in Colorado, a growing number of state and city officials have been publicly discussing making a run at the 2022 Winter Games. But the USOC recently told the Denver Post that the organization is holding off on any future bids until the revenue-sharing dispute is resolved with the IOC. 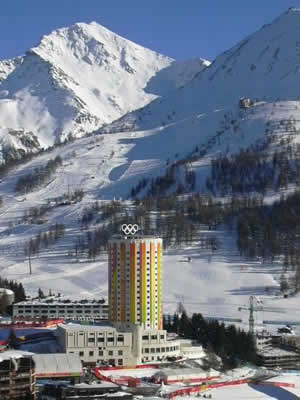 "We aren't at this point considering bidding for any Games," USOC spokesman Patrick Sandusky told the Post, adding a bid for the 2022 Winter Olympics would have to be in by late 2013. That means Colorado officials only have two years to gather public support for an event that voters once rejected in the early 1970s over economic and environmental concerns.

According to the Associated Press, the USOC insists on 20 percent of global sponsorship revenues and a 12.75 percent share of U.S. broadcast rights. The IOC wants more of that money to come its way.

Vail, which has twice hosted the World Alpine Ski Championships -- second only to the Olympics in ski-racing prestige (and will do so again in 2015) -- is a likely venue for the alpine racing events. Beaver Creek is expanding its Birds of Prey downhill course and including a women's downhill course for the 2015 Championships.

Bennet, co-chair of the Congressional Olympic and Paralympic Caucus, cited the $6 million economic benefit of the U.S. Olympic trials for curling when Broomfield hosted that event in 2009. Here's the complete text of his letter to Probst:

I write to encourage the United States Olympic Committee (USOC) to reach an expeditious agreement with the International Olympic Committee (IOC) regarding the current revenue sharing issues that have arisen. A timely resolution to this matter would only serve to benefit American cities considering a bid to serve as a host city to a future Olympic Games.

The economic benefits associated with serving as a host to the Olympics would be attractive to any city pondering a bid. With much of the infrastructure needed to host an event of this magnitude already in place, a city like Denver would stand to reap those benefits several times over if it were chosen as a host city. As an example, about $6 million was infused into the local economy when Broomfield played host to the U.S. Olympic trials for curling in 2009. I'm hopeful that bringing the Olympics to the region would boost these totals exponentially.

As you may know, the City of Denver has indicated an interest in a potential bid to host a future Winter Olympics. Colorado Governor John Hickenlooper and Denver Mayor Michael Hancock have begun informal conversations regarding a possible bid. Additionally, leaders across the Rocky Mountain region have begun the necessary work to produce a successful bid. As you are aware, the work and preparation that it takes to produce a winning bid is extensive. It would be unfortunate if the current impasse undermined these efforts.

It is my understanding that the USOC has decided to withhold submitting any bids to host the Olympics until an agreement over revenue sharing can be reached with the IOC. State and local officials in Colorado will find it difficult to advance preparations for a possible bid without a sense of certainty that the USOC would be willing to move forward. For this reason, I urge you and the USOC Board of Directors to work with the IOC to find common ground on this issue.

I am certain that Denver has the necessary capacity, location and resources to put together a successful bid for a future Winter Olympics. And should it choose to do so, Denver and the entire Rocky Mountain region would enjoy countless cultural and economic benefits. Please let me know if I can be of any assistance as you work through this important issue with the IOC.

0 Comments on "Sen. Bennet urges USOC, IOC to play nice on revenues so Denver can bid on 2022 Winter Olympics"