RealAspen News and Community Content Feed
By David O. Williams
Real Aspen – August 3, 2011
Gov. John Hickenlooper Tuesday dismissed the fears of activists and community members concerned that the natural gas drilling process of hydraulic fracturing can contaminate groundwater supplies, but he conceded the state should require the industry to disclose chemicals used in the “fracking” process.

“Everyone in this room understands that hydraulic fracturing doesn't connect to groundwater, that it's almost inconceivable that groundwater will be contaminated,” Hickenlooper said in the opening speech of the Colorado Oil & Gas Association (COGA) annual meeting in Denver, according to the Denver Business Journal.

“But the industry needs to be transparent. It needs to demonstrate, beyond a doubt, that this doesn't happen. [Transparency] creates a tremendous show of good faith and shows that the industry cares,” added the former petroleum geologist turned restaurant mogul turned politician.

To that end, Hickenlooper, a Democrat who's taken a much friendlier environmental stance with the oil and gas industry than his predecessor, Democrat Bill Ritter, said Colorado will work toward a new rule compelling companies to publicly disclose the chemicals in hydraulic fracturing by the end of the year. 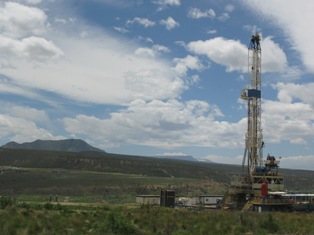 The Colorado Oil and Gas Conservation Commission (COGCC) and Colorado Department of Public Health and Environment (CDPHE) also would work with the industry to do baseline water sampling before and after fracking operations to ensure water quality, Hickenlooper said.

Fracking involves injecting water, sand and undisclosed chemicals deep into natural gas wells to force open tight rock and sand formations and free up more gas. Chemical formulas are considered proprietary trade secrets by drilling companies, most of which insist fracking occurs so far below groundwater supplies that it can't possibly cause contamination.

The U.S. Environmental Protection Agency (EPA) is conducting a study of hydraulic fracturing, including certain sites in Colorado, and a recent study conducted by a Forest Service researcher showed the potentially devastating effects of fracking fluids on ground cover vegetation and trees.

Colorado conservation groups were buoyed by the governor's announcement at an industry event, although at least one group said it will “reserve its enthusiasm” until a formal rulemaking process is announced.

“We appreciate the governor's interest in this very serious matter and applaud his fortitude,” Frank Smith of Western Colorado Congress said in an email. “It's about time. Colorado has over 43,000 active oil and gas wells, with thousands more being planned close to communities and water supplies. As drilling encroaches upon more communities and enters more watershed boundaries, it is encouraging to have the governor state such interest.”

Smith wondered if there is connection to an independent review of the state's hydraulic fracturing rules being conducted by a group called State Review of Oil & Natural Gas Environmental Regulations (STRONGER).

Both neighboring Wyoming and nearby Texas have stronger disclosure rules for fracking, and Hickenlooper today said he would like to see a rule similar to those two states, both of which allow certain exemptions from public disclosure for chemicals that are considered “proprietary.”

“There can't be propriety exemptions like in Wyoming or Texas,” Smith added. “We look forward to contributing to any formal rule-making process.”

A very awesome blog post. We are really grateful for your blog post. You will find a lot of approaches after visiting your post. buy narrative essay online

Positive site, where did u come up with the information on this posting?I have read a few of the articles on your website now, and I really like your style. Thanks a million and please keep up the effective work. imr trail boss powder in stock

I was surfing the Internet for information and came across your blog. I am impressed by the information you have on this blog. It shows how well you understand this subject. custom term paper

This is such a great resource that you are providing and you give it away for free. I love seeing blog that understand the value of providing a quality resource for free. bwclub88

This is such a great resource that you are providing and you give it away for free. I love seeing blog that understand the value of providing a quality resource for free. dalatmilk

You completely match our expectation and the variety of our information. panettoni artigianali