RealAspen News and Community Content Feed
By David O. Williams
Real Aspen – July 25, 2011
Kayakers and conservation groups will rally at a downtown Denver boat shop Tuesday to hand deliver U.S. Environmental Protection Agency (EPA) Region 8 Director Jim Martin tens of thousands of comments on the federal agency's proposed guidance on which bodies of water in Colorado and around the nation qualify for protection under the Clean Water Act.

According to a release from Environment Colorado, “Recent Supreme Court decisions have left murky which Colorado waterways are fully protected under the Clean Water Act, putting a question mark over 65,000 miles of rivers and streams throughout Colorado where right now folks are seeking relief from the summer heat rafting, kayaking, swimming and fishing.”

Originally set to end on June 30, the public comment period on the proposed guidance was extended another 30 days until July 31.

“The draft guidance will reaffirm protections for small streams that feed into larger streams, rivers, bays and coastal waters,” according to the EPA website. “It will also reaffirm protection for wetlands that filter pollution and help protect communities from flooding. 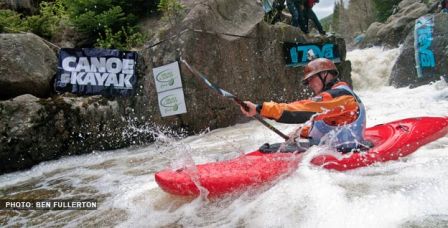 “This guidance will keep safe the streams and wetlands that affect the quality of the water used for drinking, swimming, fishing, farming, manufacturing, tourism and other activities essential to the American economy and quality of life. It also will provide regulatory clarity, predictability, consistency and transparency.”

Some Republican lawmakers, including members of Colorado's congressional delegation, have strongly opposed the proposed guidance, calling it a job-killing overreach by the Obama administration. The GOP-controlled U.S. House just last week passed the Clean Water Cooperative Federalism Act by a margin of 239-184. All four Republican members of Colorado's congressional delegation voted for the measure; all three Democrats voted no.

Sponsored by John Mica, R-Fla., the bill would amend the 40-year-old Clean Water Act to prohibit the EPA from revising current water quality standards or mandating new ones for a pollutant if a state already has standards in place.

“Colorado knows best how to manage its own resources, especially a resource as scarce as water,” 4th Congressional District Rep. Cory Gardner said in a release defending his yes vote. “The federal government should not have the authority to second guess or delay the state's decision with regard to permitting and water quality
RealAspen News and Community Content Feed

Impressive web site, Distinguished feedback that I can tackle. Im moving forward and may apply to my current job as a pet sitter, which is very enjoyable, but I need to additional expand. Regards. japanese italian restaurant in singapore

I’ve read some good stuff here. Definitely worth bookmarking for revisiting. I surprise how much effort you put to create such a great informative website. get hair salon price

Took me time to read all the comments, but I really enjoyed the article. It proved to be Very helpful to me and I am sure to all the commenters here! It’s always nice when you can not only be informed, but also entertained! more about

Positive site, where did u come up with the information on this posting?I have read a few of the articles on your website now, and I really like your style. Thanks a million and please keep up the effective work. best safe deposit box

I found this is an informative and interesting post so i think so it is very useful and knowledgeable. I would like to thank you for the efforts you have made in writing this article. nearest asian buffets

I am always looking for some free kinds of stuff over the internet. There are also some companies which give free samples. But after visiting your blog, I do not visit too many blogs. Thanks. reflow oven machine

Thanks for taking the time to discuss this, I feel strongly about it and love learning more on this topic. If possible, as you gain expertise, would you mind updating your blog with extra information? It is extremely helpful for me. selling merchant services

Thanks so much for this information. I have to let you know I concur on several of the points you make here and others may require some further review, but I can see your viewpoint. https://businesslog9.blogspot.com/2022/10/corporate-promotional-gifts-details.html

There is so much in this article that I would never have thought of on my own. Your content gives readers things to think about in an interesting way. Thank you for your clear information. link sbobet

I would like to say that this blog really convinced me to do it! Thanks, very good post. https://businessleads567.blogspot.com/2022/10/best-data-archiving-to-guard-essential.html

There are a number dissertation web sites on line any time you see unsurprisingly labeled in the internet site. Best Product

Thank you for some other informative website. The place else may just I get that kind of information written in such a perfect method? I have a venture that I am simply now running on, and I’ve been at the glance out for such info. 土耳其簽證在線申請

Thanks for sharing us. НОВАЯ ЗЕЛАНДИЯ ВИЗА ОНЛАЙН

i was just browsing along and came upon your blog. just wanted to say good blog and this article really helped me. இந்தியாவுக்கான மருத்துவ உதவியாளர் விசா

This is a great inspiring article.I am pretty much pleased with your good work.You put really very helpful information. Keep it up. Keep blogging. Looking to reading your next post. Turkey Visa for Kenyan Citizens

i am for the first time here. I found this board and I in finding It truly helpful & it helped me out a lot. I hope to present something back and help others such as you helped me. درخواست ویزای هند

A great content material as well as great layout. Your website deserves all of the positive feedback it’s been getting. I will be back soon for further quality contents. Kanādas vīzu prasības

I found that site very usefull and this survey is very cirious, I ' ve never seen a blog that demand a survey for this actions, very curious... 壯陽藥

I found your this post while searching for some related information on blog search...Its a good post..keep posting and update the information. imr 4350 8 pounds

Pretty good post. I just stumbled upon your blog and wanted to say that I have really enjoyed reading your blog posts. Any way I'll be subscribing to your feed and I hope you post again soon. Big thanks for the useful info. https://termpapermaster.com/buy-term-paper-online/

Pretty good post. I just stumbled upon your blog and wanted to say that I have really enjoyed reading your blog posts. Any way I'll be subscribing to your feed and I hope you post again soon. Big thanks for the useful info. bwclub88

Pretty good post. I just stumbled upon your blog and wanted to say that I have really enjoyed reading your blog posts. Any way I'll be subscribing to your feed and I hope you post again soon. Big thanks for the useful info. dalat milk

Pretty nice post. I just stumbled upon your weblog and wanted to say that I have really enjoyed browsing your blog posts. After all I’ll be subscribing to your feed and I hope you write again soon! indian visa from china

Hey, I am so thrilled I found your blog, I am here now and could just like to say thank for a tremendous post and all round interesting website. Please do keep up the great work. I cannot be without visiting your blog again and again. Canada Visa for Israel Citizens

Here are a few dissertation web sites when using the world-wide-web when you finally come to be clearly claimed in your blog site. Nueva Zelanda VISA

Wow, excellent post. I'd like to draft like this too - taking time and real hard work to make a great article. This post has encouraged me to write some posts that I am going to write soon. Заявка на візу в Туреччину онлайн

Fantastic blog! Do you have any tips and hints for aspiring writers? I’m planning to start my own website soon but I’m a little lost on everything. Would you propose starting with a free platform like WordPress or go for a paid option? There are so many options out there that I’m completely overwhelmed .. Any suggestions? Many thanks! MGA KINAKAILANGAN NG NEW ZEALAND VISA

Thanks for picking out the time to discuss this, I feel great about it and love studying more on this topic. It is extremely helpful for me. Thanks for such a valuable help again. Заявление на получение визы в Турцию онлайн

I recently found many useful information in your website especially this blog page. Among the lots of comments on your articles. Thanks for sharing. viaggi

Outstanding article! I want people to know just how good this information is in your article. Your views are much like my own concerning this subject. I will visit daily your blog because I know. It may be very beneficial for me. indian medical visa requirements

Wow! This could be one of the most useful blogs we have ever come across on thesubject. Actually excellent info! I’m also an expert in this topic so I can understand your effort. இந்தியா விசா விண்ணப்பம்