RealAspen News and Community Content Feed
By David O. Williams
Real Aspen – July 21, 2011
The U.S. Environmental Protection Agency (EPA) hasn't exactly given the controversial Colorado Roadless Rule a failing grade, but the federal agency this week did issue an “I” for incomplete.

Technically, the EPA rated the revised draft environmental impact statement (RDEIS) by the U.S. Forest Service an EC-2, or “Environmental Concerns – Insufficient Information.” That means EPA wants a lot more information before it will sign off on a plan by the state of Colorado and the USFS for managing nearly 4.2 million acres of roadless national forest in the state.

“Our primary concerns and recommendations are as follows: inclusion of limited upper-tier acreage, air quality, greenhouse gas emissions associated with future coal development, aquatic resources and environmental justice,” the EPA wrote in its comments to the Forest Service on Monday (pdf).

In Alternative 2, the Forest Service's preferred alternative, 562,200 acres are afforded “upper tier” protection from road building. Opponents of the state-specific plan for managing federal roadless areas have long maintained that granting only 13 percent of the overall acreage upper tier status is woefully inadequate.

“The proposed alternative of the Colorado Roadless Rule falls short in several ways,” DeGette wrote to the Forest Service. “It provides ‘upper tier' protection to only 13 percent of Inventoried Roadless Areas even though over 65 percent of these areas are identified in the various alternatives for the ‘upper tier' category.”

The EPA agrees, pointing out 2,614,200 acres would be designated upper tier in Alternative 4, with all eight of the national forests in Colorado included.

EPA also asked the Forest Service to conduct additional baseline air quality studies near communities that would be impacted by any road-building exemptions for mining, oil and gas drilling, logging or ski area expansion – especially nearly 20,000 acres exempted for coal mining along the North Fork of the Gunnison River. 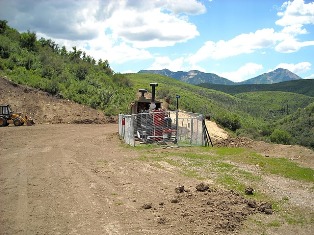 A coal mine venting methane gas along the North Fork of the Gunnison.
WildEarth Guardians
With the potential for leases that could ultimately recover up to 360 million tons of coal, EPA wants the USFS to “quantify and disclose projected annual and total lifetime cumulative greenhouse gas emissions, including emissions from combustion of the mined coal, resulting from potential future coal development.”

Environmental groups have been battling to have federal land management agencies such as the Forest Service and BLM take into consideration the venting of methane gas from Colorado coal mines. Methane is 20 times more potent than carbon dioxide as a heat-trapping greenhouse gas.

EPA also wants the Forest Service to quantify the impacts of road building for tree removal, linear construction zones and ski resort expansion on wetlands in the state's national forests.

Finally, the federal agency is seeking more information on how road building might impact low-income and minority communities in and around national forest roadless areas – so-called “environmental justice” concerns.

The Colorado Roadless Rule has taken nearly six years to get to this point after the Bush administration allowed state-specific plans for managing federal roadless areas. Only Idaho and Colorado pursued their own rules, with the rest of the nation willing to wait out ongoing legal challenges to the 2001 Clinton Roadless Rule.