RealAspen News and Community Content Feed
By David O. Williams
Real Aspen – July 9, 2011
Vail Valley icon and former first lady Betty Ford passed away at the age of 93 on Friday, leaving a legacy of outspoken support for women's issues and those suffering from breast cancer, drug and alcohol addiction.

While local landmarks ranging from a ski run (38) to the Vail Post Office to a park, amphitheater and even Interstate 70 through town bear the name of Gerald R. Ford – the late 38th president of the United States who chose the Vail Valley as his western White House in the 1970s – the sole tribute to his wife of 58 years is perhaps appropriately the serene and dignified Betty Ford Alpine Gardens. It's a place of great tranquility ideal for introspection.

“Betty Ford's courage to speak out on breast cancer and addictive disease forever changed how these conditions are viewed,” reads a tribute on the website of the Better Ford Center, a world-famous addiction recovery center she founded in 1982. “She promoted the importance of treatment and access to care for all.”

A breast cancer survivor, Ford spoke openly about her disease at a time when the topic was somewhat taboo and carried with it a social stigma. Late into life she supported the work of the Vail Breast Cancer Awareness Group, participating in its fashion show while her daughter Susan was once a speaker at the its annual fund-raising luncheon.

“Mother's love, candor, devotion, and laughter enriched our lives and the lives of the millions she touched throughout this great nation,” Susan Ford Bales wrote on the Gerald R. Ford Presidential Library & Museum website, along with her brothers Steven, John and Michael. “To be in her presence was to know the warmth of a truly great lady.” 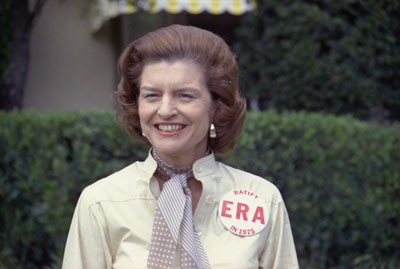 Ford died peacefully at the Eisenhower Medical Center in Rancho Mirage, Calif., on Friday, according to the family, which has yet to release funeral details but will reportedly do so on the website www.bettyfordmemorial.com.

The Fords maintained a home in the Palm Springs area, as well as the home they built under the Strawberry Park chairlift at the fledgling Beaver Creek ski resort 10 miles west of Vail in the early 1980s. At the time, it was a major marketing boost for a resort struggling through a real estate collapse similar to the current downturn.

The Ford's Beaver Creek home, which was sold after Gerald Ford's death in December of 2006, is reportedly back on the market.

Ford quietly opposed her husband's infamous decision to pardon President Richard M. Nixon in the wake of the Watergate scandal, but Gerald Ford defended his actions right up until his death.

“It would have been a long, tortuous process,” Gerald Ford said of an impeachment trial after Nixon died in 1994. “That would only have exacerbated the unrest and the domestic trouble here in the United States, and the only way to get that whole problem off my desk in the Oval Office … was to grant the pardon.”

Gerald Ford, Nixon's vice president, ascended to the White House when Nixon resigned, and his pardon likely cost the Republican the office in the 1976 campaign against Democrat Jimmy Carter.