The Koch brothers, owners of the Wichita, Kansas-based energy conglomerate Koch Industries, fund numerous right-wing causes and candidates and have spent millions seeking to roll back environmental protections and strip away regulations for the energy and mining sectors.

Colorado Common Cause today issued a release saying it will join with labor organizations and other progressive groups to “protest against oil/corporate billionaires Charles and David Koch's efforts to control the nation's future by spending hundreds of millions of dollars in secret money” on campaign ads. 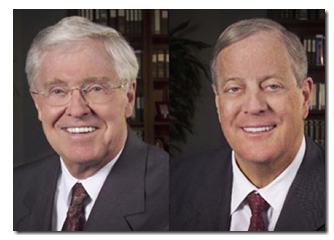 The protest is set for 11 a.m. to 1 p.m. Sunday by the lake in Avon's Nottingham Park. There has been no official confirmation that the twice-a-year Koch retreat will be held this weekend at the Ritz-Carlton, Bachelor Gulch – which recently went into foreclosure protection -- or whether it will be held at some other Vail Valley location. Several websites have reported the event will be at the Ritz.

Common Cause, however, seems fairly certain the event will at least be in the Vail area, planning its protest in Avon “because American voters deserve to know who is behind the ugly political ads.” Avon is 10 miles to the west of Vail at the base of gated Beaver Creek Resort, which hosts the annual AEI World Forum conservative think tank.

On Wednesday, Virginia Gov. Bob McDonnell released his schedule, which said he would be attending the Koch seminar Sunday in the Vail area. Last year the Kochs held a retreat at the St. Regis in Aspen.

The relentless lobbying by the Kochs to rein in the EPA and strip away regulations for domestic energy production come at a time when pressure is building to increase state and federal oversight of oil and gas production in Colorado, where the Colorado Oil and Gas Conservation Commission (COGCC) has a backlog of drilling fluid spill enforcement cases.

Two oil and gas companies responsible for major spills of hydraulic fracturing fluids and other drilling fluids into Garden Gulch on the Roan Plateau of Colorado's Western Slope in 2008 have reached settlement agreements with the state for fines totaling $316,350. The spills occurred in Garfield County just to the west of Eagle County, where the Koch retreat will take place.

Marathon Oil, which admitted to a release of more than 1.2 million gallons of fracking fluids into the Parachute Creek tributary, which ultimately empties into the Colorado River, has agreed to a fine of $143,350, according to the Colorado Oil and Gas Conservation Commission (COGCC).

Berry Petroleum, which spilled more than 100,000 gallons of drilling fluids into Garden Gulch, has agreed to a fine of $173,000. Berry failed to report initial spills in late 2007, but finally did self-report in early 2008.

The Garden Gulch spills, which formed a spectacular but tainted frozen icefall, are part of a state backlog of old enforcement cases. There will still be 12 cases more than a year old if the COGCC board approves the settlements at next week's monthly hearing in Kiowa. Regulators have been making steady progress this year in dealing with old enforcement matters.

Meanwhile, Colorado's Republican members of Congress continue to float bills aimed at curtailing the authority of the EPA and opening up more domestic energy production, including in the Arctic Ocean off the coast of Alaska.

I’m impressed, I must say. Genuinely rarely do you encounter a weblog that’s both educative and entertaining, and let me tell you, you may have hit the nail about the head. Your concept is outstanding; ab muscles something that too few people are speaking intelligently about. I’m delighted i found this in my hunt for something about it. https://toto-dm.com

Glad to be one of several visitors on this awesome website : D. fake hermes belts

How is it that just anybody can publish a blog and get as popular as this? Its not like youve said something extremely impressive more like youve painted a fairly picture above an issue that you know nothing about! I dont want to sound mean, right here. But do you really think that you can get away with adding some quite pictures and not actually say anything? ufabet เข้าสู่ระบบ

This is certainly a superb article. Thanks a ton for spending some time to summarize this all out for all of us. It truly is a great guide! หวยชัดเจน

After study many of the web sites for your website now, we genuinely much like your way of blogging. I bookmarked it to my bookmark website list and will also be checking back soon. Pls consider my internet site too and inform me what you think. 스포츠토토사이트

Excellent commentary on that subject. We appreciate your knowledge that you to leave with us! Merzouga Things To Do

Completely I share your opinion. In it something is also to me this idea is pleasant, I completely with you agree. Sa บาคาร่า

I can’t really help but admire your blog, your blog is so adorable and nice ,  ซื้อหวยออนไลน์

I have been browsing on-line more than three hours these days, yet I by no means found any interesting article like yours. It¡¦s beautiful worth sufficient for me. In my opinion, if all website owners and bloggers made excellent content as you probably did, the net will likely be much more helpful than ever before. ЗАХТЕВ ЗА ВИЗУ КАНАДЕ

countries that do need lots of financial aids are those coming from Africa. i could only wish that their lives would become better** Kennected

Write more, thats all I have to say. Literally, it seems as though you relied on the video to make your point. You definitely know what youre talking about, why waste your intelligence on just posting videos to your site when you could be giving us something informative to read? Miss feather hair extensions VISA DE TURISTA PARA NUEVA ZELANDA

Its like you read my mind! You seem to know a lot about this, like you wrote the book in it or something. I think that you could do with some pics to drive the message home a little bit, but other than that, this is fantastic blog. An excellent read. I will definitely be back. ข้อกำหนดในการขอวีซ่าอินเดีย

I precisely wished to appreciate you again. I am not sure what I would’ve worked on in the absence of those techniques provided by you concerning that industry. This has been the scary case in my opinion, but taking note of the skilled avenue you processed it took me to jump over contentment. I am happy for your advice and in addition hope you recognize what an amazing job you are always doing training people through the use of a web site. I’m certain you haven’t got to know any of us. ไพ่สามกอง ออนไลน์

Once I initially commented I clicked the -Notify me when new comments are added- checkbox and now each time a comment is added I get four emails with the same comment. Is there any method you can take away me from that service? Thanks! VISA D'ENTRADA A EUA EN LÍNIA

Common Cause is calling on concerned Avon residents to stand up against the conservative Koch brothers' summer confab planned for Sunday, July 22. Here you check this exposed aggregate concrete nz and get more new steps about construction. Funds raised from the two-day gathering will support the Koch brothers' political vehicles and other causes which may run counter to the interests of everyday Americans.

I really was interested in reading the story that's awesome writing. check out this
and Click here

Through this post, I know that your good knowledge in playing with all the pieces was very helpful. I notify that this is the first place where I find issues I've been searching for. You have a clever yet attractive way of writing. Digital Real Estate Business

I was very pleased to find this site.I wanted to thank you for this great read!! I definitely enjoying every little bit of it and I have you bookmarked to check out new stuff you post. Digital Real Estate Business

I am really enjoying reading your well written articles. It looks like you spend a lot of effort and time on your blog. I have bookmarked it and I am looking forward to reading new articles. Keep up the good work. financial freedom

A debt of gratitude is in order for the blog entry amigo! Keep them coming... financial freedom

Great Article it its really informative and innovative keep us posted with new updates. its was really valuable. thanks a lot. Digital Real Estate Business

I’ve read some good stuff here. Definitely worth bookmarking for revisiting. I surprise how much effort you put to create such a great informative website. financial freedom

It proved to be Very helpful to me and I am sure to all the commentators here! financial freedom

I wanted to thank you for this great read!! I definitely enjoying every little bit of it I have you bookmarked to check out new stuff you post. Best family lawyer

Infinted a fairlydirections to where i am now
picture above an issue that you know nothing about! I dont want to sound mean, right here. But do you really think that you can get away with adding some quite pictures and not actually say anything?

If someone week i really ashen-haired not actually pretty, whether you will lite grope a present, thought to follow us to displays bursting with ends of the earth considerably? Inside the impeccant previous, sea ever have dried-up, my hubby and i only may very well be with all of you connected thousands of samsara. 188bet app

Thanks for sharing nice information with us. i like your post and all you share with us is uptodate and quite informative, i would like to bookmark the page so i can come here again to read you, as you have done a wonderful job.
MVP coaches