Report: Colorado River flows may drop by 10 to 20 percent by 2050 due to climate change

RealAspen News and Community Content Feed
By David O. Williams
Real Aspen – June 9, 2011
Hard to imagine in a year when snowpack up until recently has been more than 200 percent of normal in the Colorado River Basin and its major tributaries on the state's Western Slope, but the long-term prognosis for the river that provides water to more than 30 million people in the Desert Southwest is not good.

A new interim report released this week by the federal government, Colorado and six other states along the river suggests that “by mid-century the average yield of the Colorado River could be reduced by 10-20 percent due to climate change. Meanwhile, the Basin States include some of the fastest growing urban and industrial areas in the United States. Increasing demands coupled with decreasing supplies will exacerbate imbalances throughout the Basin in the future.”

Sobering stats from non-hysterical sources like the U.S. Bureau of Reclamation and the major stakeholders along the river. The full report will be released in digestible chunks over the next year or so and is aimed at coming up with some collaborative approaches to solving inevitable conflicts among the various user groups. For instance, energy production versus agriculture versus residential development versus outdoor recreation versus wildlife and riparian habitat. 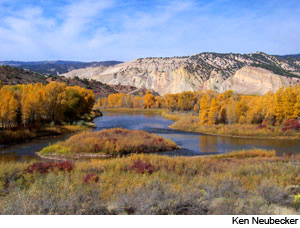 Some will no doubt say such a report is a waste of federal and state funding and that scenarios suggesting global climate change will be a factor are politically motivated. But the climate change model is one of just four possible scenarios contemplated in the report, and an ongoing drought that has depleted Lake Powell and other major reservoirs along the Colorado is factually impossible to deny.

“We are fortunate here in that the State of Colorado has recognized the importance of understanding the future water supply and demand challenges, and we have made great steps forward in identifying issues and strategies,” Jennifer Gimbel, director of the Colorado Water Conservation Board (CWCB), said in a recent release.

“Studies such as the Statewide Water Supply Initiative (SWSI 2010) and the efforts of the CWCB and the Interbasin Compact Committee (IBCC) help us to explore possible solutions to meet these future challenges. The Basin Study is a model of states working together on these issues in a more holistic and comprehensive manner.”

And it is virtually impossible to talk about climate change and energy production without talking about water supplies. The debate over oil shale production, for instance, almost always begins and ends with water. How much is required to produce oil from oil shale? Where will that water come from? And is it worth it when considering the carbon dioxide produced when developing and utilizing that resource compared to other forms of energy such as natural gas, wind and solar.

Colorado voters, to some degree, seem to be increasingly capable of making the connection between climate change and water supplies, becoming one of the first states in the nation to approve a renewable energy standard in 2004. Perhaps that stems from living in a high alpine desert where water, or the lack thereof, is always at the forefront of major public policy debates.

Even conservative columnist Vince Carroll cites that voter awareness in a column in today's Denver Post questioning U.S. Rep. Doug Lamborn, R-Colo., for joining eight other members of the House in an attempt to defund the National Renewable Energy Laboratory in Golden.

“Colorado voters approved this state's first renewable-energy mandate in 2004, and the expanded standard is probably as popular as ever,” Carroll writes. “Yet electricity ratepayers have to subsidize green technologies. Wouldn't it be nice if that weren't necessary — if renewables could compete in the marketplace without the mandates, subsidies and cost-shifting gimmickry that now prop them up? From both a political and policy standpoint, pulling the plug on research is an atrocious idea.”

Of course, some on the left have suggested it would be nice if century-old fossil fuel production companies enjoying record profits as gas prices have spiked this spring could also do without tax breaks and subsidies. But the powerful oil and gas lobby successfully squelched that line of debate in the GOP-controlled House.

Which brings the subject, inevitably, back around to water. ExxonMobil and Shell, both heavily involved in oil shale research and development on Colorado's Western Slope, are two of the biggest holders of water rights in the troubled Colorado River Basin. Ultimately, ‘Big Oil” will have a lot to say about how the dwindling resource is consumed in the increasingly populous Desert Southwest.

Interesting post , I am going to spend more time learning about this subject Bestseller

I’ve been recently wondering about the exact same point myself lately. Glad to see a person on the same wavelength! Nice article. refrigerator repair Mission Viejo

Hello there, just became alert to your blog through Google, and found that it’s really informative. I’m gonna watch out for brussels. I’ll be grateful if you continue this in future. Many people will be benefited from your writing. Cheers! 경기출장마사지

An intriguing discussion will probably be worth comment. I think that you simply write much more about this topic, it might become a taboo subject but generally consumers are inadequate to communicate in on such topics. To another. Cheers แทงหวยออนไลน์

Glad to be one of many visitants on this amazing internet site : D. รับทำ SEO

I would like to thnkx for the efforts you have put in writing this website. I am hoping the same high-grade blog post from you in the upcoming also. Actually your creative writing skills has encouraged me to get my own site now. Really the blogging is spreading its wings fast. Your write up is a good example of it. 출장마사지

Hey, just looking around some blogs, seems a pretty nice platform you are using. I’m currently using WordPress for a few of my sites but looking to change one particular of them over to a platform similar to yours as a trial run. Anything in particular you would recommend about it? voyance-tel-avenir.com

racing is the first thing in my heart and i also love to join auto racing for the adrenalin rush; https://www.slimmingtw.com/news/387.html

Pretty good post. I just stumbled upon your website and wanted to say that I have incredibly enjoyed reading your blog posts. Any way I am going to be subscribing for the feed and I hope to visit your article once again soon. Flat in Dhaka

Woah this is just an insane amount of info, must of taken ages to compile so thank you so much for just sharing it with all of us. If your ever in any need of related information, perhaps a bit of coaching, seduction techniques or just general tips, just check out my own site! Packers and Movers Coimbatore

Can I recently say thats a relief to uncover somebody who actually knows what theyre preaching about over the internet. You actually learn how to bring a problem to light and work out it critical. The diet need to read this and understand why side of your story. I cant think youre less well-known since you absolutely provide the gift. merchant services iso

i am very picky about baby toys, so i always choose the best ones’ https://www.youtube.com/watch?v=V5hdGcLZSJU

As a Newbie, I am always exploring online for articles that can aid me. Thank you led tape

Useful info. Fortunate me I discovered your website accidentally, and I am surprised why this coincidence didn’t happened earlier! I bookmarked it. North American Bancard ISO

I genuinely enjoy looking through on this web site , it holds superb articles . megagame888

Hi! Do you know if they make any plugins to safeguard against hackers? I’m kinda paranoid about losing everything I’ve worked hard on. Any tips? bolatangkas

There is so much in this article that I would never have thought of on my own. Your content gives readers things to think about in an interesting way. Thank you for your clear information. Website Design Agency

Very well said, your blog says it all about that particular topic.:*’`. สล็อต 888

This is very interesting, You’re a very skilled blogger. I have joined your feed and look forward to more of your magnificent post. Also, I’ve shared your website in my social networks! how to become a payment processor

there are many different book genres online but i would really love to read about self help books,. merchant services iso program

My husband and i felt now joyful Ervin could finish up his inquiry with the precious recommendations he was given in your web pages. It's not at all simplistic just to happen to be making a gift of methods that many people may have been trying to sell. Therefore we understand we need the writer to give thanks to for that. These explanations you made, the easy website menu, the relationships you will make it possible to foster - it's got all astounding, and it's really leading our son and the family consider that that subject matter is thrilling, and that is extremely serious. Thanks for all the pieces! become an iso for merchant services

bathroom towels should be maintained with a good fabric conditioner so that they will last longer:: selling payment processing

Can’t hold out to learn a greater portion of your articles down the road. thumbs way up!. iso payment processor

Thanks for the nice blog. It was very useful for me. I'm happy I found this blog. Thank you for sharing with us,I too always learn something new from your post. how to become a payment processor

you will have an important blog right here! would you wish to make some invite posts on my blog? Jack Herer Pen

You must participate in a contest for one of the best blogs on the web. I’ll recommend this web site! Absolutextracts For Sale

I keep listening to the news update lecture about receiving free online grant applications so I have been looking around for the best site to get one. Could you advise me please, where could i get some? restaurant

I really love the way you discuss this kind of topic.”‘*,- best diet pills

My spouse and I found you from a another page plus thought I might check things out on Ø§Ù„Ø¥Ø­ØªØ¨Ø§Ø³ Ø§Ù„Ø­Ø±Ø§Ø±ÙŠ ÙˆØ£Ø«Ø±Ù‡ Ø¹Ù„Ù‰ Ø§Ù„Ø¨ÙŠØ¦Ø© | Ù‡Ù†Ø¯Ø³Ø© Ù†Øª . We like what I view thus now I am a fan. Look toward exploring your web site again. Incidentally what about Muammar Gaddafi breathtaking media stories what do you really think . Kudos … Irrigation System Maintenance Game bài đổi thưởng

This web-site can be a walk-through its the data it suited you with this and didn’t know who ought to. Glimpse here, and you’ll undoubtedly discover it. รับเขียนเว็บไซต์

Hello, Neat post. There is an issue along with your site in web explorer, could test this¡K IE still is the marketplace leader and a huge portion of other people will miss your magnificent writing because of this problem. appetite suppressants