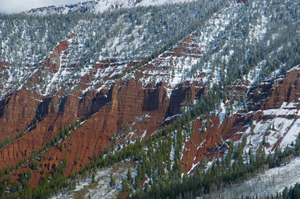 The Eagle River Water and Sanitation District wants the 342,000-acre, four-county, two-national-forest wilderness expansion – which prohibits motorized travel and mechanized or industrial uses on public lands – to be delayed by two years to allow more study of how watersheds should be managed.

Polis is considering all the alternatives and could introduce a bill a soon as this fall, but the 2nd Congressional District representative for Vail and surrounding Eagle County is looking to garner local support first. Six areas of Eagle County are being considered for wilderness designation, and the water district says all six include watersheds critical to local residents and future growth.

Linn Brooks, assistant general manager for the water district, told the Vail Town Council restoring watersheds ravaged by fires like the massive Hayman blaze is one major concern the district has about permanently locking up so much national forest in wilderness areas.

Proponents for Hidden Gems, including the Wilderness Society, expressed surprise at the district's opposition, saying they've had a seat at the negotiating table all along. And some town officials seemed satisfied with the plan locally after it was modified to address concerns about mountain pine bark beetle mitigation raised by the Vail Fire Department.

Some backers of mechanized recreational travel, including mountain bikers, said alternative conservation measures should be explored so as not to lock out two-wheeled travelers, but town council member Margaret Rogers said she rides and is happy with changes made by the Hidden Gems proponents.

“They've done what needed to be done” regarding mountain biking, Rogers said, adding there are still thousands of miles of trails left to ride on in Eagle County. She made a motion to approve the resolution, got a second, but then pulled her motion when three other council members opposed it based on the water district concerns, as well as other issues.

The council will take the matter up again in September when a seventh council member can be present to break any potential deadlocks on the matter.

Eagle River Water handling through govt sectors now a day and they focused on more process. The https://theislandnow.com/blog-112/get-professional-assistance-from-essay-writer-for-your-custom-papers/ fetch the report on this river and what we need to know.

Vail Council withholds support for Hidden Gems in wake of water concerns is a great post and I saw many people are searching for this. When the students ask Why Do UK Students Want to Buy an Assignment? - BK Reader we can find the best places where we can get the desired answer.

Would you like the specialists from EssayMarket to do the essay for you? Take advantage of the help of real professionals and get rid of the academic burden.

I have been using a proven car rental company for many years. I have never been dissatisfied with a car or service. You can visit their site and make sure of this based on independent reviews of consumers.
https://14cars.com/car-rental/usa-cincinnati-airport-cvg-ky-van

I have been using a proven car rental company for many years. I have never been dissatisfied with a car or service. You can visit their site and make sure of this based on independent reviews of consumers. I recently used passenger van rental in Cincinnati

In light of concerns over water supply in some parts of the town, the Vail Board of Trustees is withholding support for Hidden Gems, a downtown catering company that serves as the town's official caterer. Here you follow this briansclub and learn more new tips for managing their online marketing trade. The Vail Town Council canceled a special meeting called to discuss the Hidden Gems ski resort expansion project, citing "water issues." The cancellation was announced by councilmember Camilo Lara in conjunction with the release of Vail Resorts' plans to expand Hidden Gems.

Well, I want to tell you about one great website to get [url=https://www.bestcustomwriting.com/research-paper-assistance]help with research paper[/url] writing and some other boring activities. It's BestCustomWriting, and maybe you have heard about it elsewhere. I hadn't seen any mentions of it until I decided to find a helper.

Well, I want to tell you about one great website to get help with research paper writing and some other boring activities. It's BestCustomWriting, and maybe you have heard about it elsewhere. I hadn't seen any mentions of it until I decided to find a helper.