RealAspen News and Community Content Feed
By David O. Williams
Real Aspen – March 19, 2011
As the premier of British Columbia, Gordon Campbell gets a lot of credit for pulling off the successful 2010 Winter Olympics in Vancouver despite a global recession and challenging weather. As a state lawmaker and later Democratic governor of Colorado, Dick Lamm gets a lot of the blame for torpedoing the public financing for the 1976 Winter Olympics in Denver.

Those Games had actually been awarded to Denver by the IOC and Lamm, now co-director of the Institute for Public Policy Studies at the University of Denver, led the charge to pull the plug on the '76 Winter Games because he feared massive public debt and an environmental disaster.

Lamm and Campbell will participate in a public forum in Vail on Tuesday, which also will include Steve McConahey, former chairman of the Denver Metro Sports Commission — the organization leading the charge to bring the Olympics to Colorado. A former special assistant to late President Gerald Ford and program administrator for the Urban Mass Transit Administration of the U.S. Department of Transportation, McConahey is now chairman of SGM Capital. 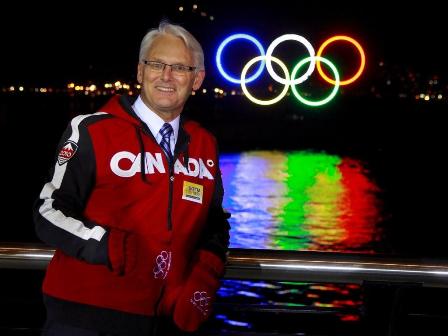 The Vail Symposium panel discussion entitled “Should Colorado bid for Olympic Games?” is scheduled for Tuesday at 5:30 p.m. at the Sebastian at Vail hotel in Vail. It will be moderated by former Vail Resorts president and current Vail Town Council member Andy Daly. The cost is $45 for the general public and $35 for Vail Symposium donors.

The question of Colorado hosting the Winter Games has been put off for a few years given the fact that the USOC declined to put in a bid for 2018 because it was focused on the failed 2016 Summer Games bid in Chicago. Those Olympics were awarded to Rio de Janeiro, Brazil, much to the delight of President Barack Obama bashers. The location of the 2018 Winter Olympics still hasn't been determined, but Colorado is not in the running and wouldn't be able to host until 2022 at the earliest.

There are questions of whether Denver, the only city to ever be awarded the Olympics and then turn them away, even has a shot with international organizers who may hold a grudge. But the bigger debate remains the same from Lamm's days in public office: is the taxpayer expense worth the potential infrastructure hassles and environmental impacts?

Lamm, in a previous email interview with the Colorado Independent, clearly still thinks Denver-area voters made the right call in 1972.

“I come down on believing strongly that the voters did the right thing,” Lamm said. “The history of the Winter Olympics was a history of red ink, and I believe it would have left Colorado with a very large expense and a worse environment.”

Daly previously told the Colorado Independent he thought the Winter Olympics might be the only way Colorado every sees high-speed rail between the Front Range and the mountain resorts along the Interstate 70 corridor. Rail service between Vancouver and Whistler was actually discontinued a few years before the 2010 Games, although the connecting Sea to Sky highway was dramatically improved, and Vancouver itself saw significant rail upgrades.

It is good that church communities still remembers about this and organize special memorial service in his name. When I was small I have seen him service in church which I use to go on every Sunday according to grab my essay review. He is very nice and always use have the smile in his face. I have never seen him getting angry on anyone.

hi, your website is really good. I truly do appreciate your give good results 안전놀이터

I’m really enjoying the theme/design of your website. Do you ever run into any browser compatibility issues? A couple of my blog audience have complained about my blog not working correctly in Explorer but looks great in Safari. Do you have any suggestions to help fix this issue? Заявление за виза за Турция

Good article , I am going to spend more time learning about this topic 토토사이트

My brother recommended I might like this blog. He was totally right. This post actually made my day. You can not imagine just how much time I had spent for this info! Thanks! Prijava za indijsku vizu

Aw, this became an exceptionally nice post. In thought I have to place in writing like this additionally – spending time and actual effort to make a good article… but exactly what can I say… I procrastinate alot and by no means often go carried out. 안전놀이터 추천

I’d must consult you here. Which is not some thing It’s my job to do! I spend time reading an article that may get people to think. Also, many thanks for permitting me to comment! ราคาติดตั้งกล้องวงจรปิด 4 ตัวพร้อมติดตั้ง

This is such a great resource that you’re offering and you provide out at no cost. I appreciate seeing sites that realize the worth of offering a perfect useful resource totally free. I genuinely loved reading your submit. 바카라사이트 추천

You seem to be very professional in the way you write.,**”‘ 스포츠토토사이트

I found your weblog web site on google and check a few of your early posts. Continue to maintain up the superb operate. I just further up your RSS feed to my MSN News Reader. Searching for forward to studying extra from you in a while!… joker888

How do I know if a Wordpress theme supports a subscribe option? Exterior Stucco Contractor

It really is uncomplicated to get sensible following the celebration. India toeristenvisum

After study some of the websites with your internet site now, i really as if your way of blogging. I bookmarked it to my bookmark site list and will be checking back soon. Pls look at my site likewise and figure out what you believe. 안전놀이터

Good write-up, I¡¦m normal visitor of one¡¦s blog, maintain up the nice operate, and It is going to be a regular visitor for a long time. https://www.656win.com

Thank you for your very good information and respond to you. san jose car dealers LIVE CASINO

I’d have to talk with you here. Which isn’t some thing I do! I spend time reading a post that could make people think. Also, thank you for permitting me to comment! 토토사이트

wedding venue beside the beach is i think the best and looks very romantic, Intian lääketieteellinen viisumi

Great news, I will recommend it to my friends for them to check out. Thanks for sharing! If you have more time, please visit: crossword puzzles

TechToROMs is home to the best games and emulators around. Some of our most popular games include "Super Mario 64," "The Legend of Zelda: Ocarina of Time," "Pokemon Red/Blue/Yellow," "Final Fantasy VII," and "Crash Bandicoot".

I can set up my new idea from this post. It gives in depth information. Thanks for this valuable information for all. Financial Advisor

I have read your article, it is very informative and helpful for me.I admire the valuable information you offer in your articles. Thanks for posting it. RD Service