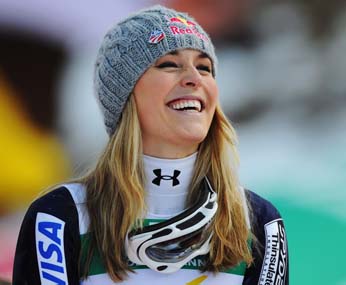 “Today feels like a gold medal,” said Vonn, who sat out the slalom portion of the super combined earlier in the Championships. “It's a really great feeling and I couldn't be happier. I could feel the speed today. I think I made some really good turns and I was happy with my skiing. There were great conditions out there. It was a fun downhill and I enjoyed racing it.”
Austrian Elisabeth Goergl earned gold to sweep the women's speed events ahead of hometown favorite Maria Riesch, who earned her second bronze of the Championships.

“Lizzy [Goergl] has stepped up and she's done incredibly well. Her runs were amazing. I watched her run from the super combined and I thought 'wow'. She's stepping up and it's really cool to see. She's a really hard worker and a very nice person. It's fun to see people really step up in World Championship events.”

“Of course, I'd love to do the team event,” Vonn said. “I'd love to do the GS and slalom as well. But I don't know if that's the best thing right now. I'm going to talk to my doctors and my husband and we'll make that decision. I haven't made a decision yet.”
Mancuso was gunning for her fifth Worlds medal after winning the silver in the super G on Tuesday.

"Worlds is one of those things were you have to enjoy it, but then if you don't succeed you have to let it go,” Mancuso said. “I'm really impressed by the crowd here. It's one of the best crowds we've had at a World Championships.”

“The surface is actually really good,” she said. “My game plan was just to take risks and make sure to not give myself any room for mistakes. I executed the second half of the course, but unfortunately I'm not sure where the time when on the top part.”

Weather definitely played a factor in how she raced today.

I read that Post and got it fine and informative. joker123

Really nice and interesting post. I was looking for this kind of information and enjoyed reading this one. Keep posting. Thanks for sharing. caricaturas de los 80

A good blog always comes-up with new and exciting information and while reading I have feel that this blog is really have all those quality that qualify a blog to be a one. biolovematch

Glad to chat your blog, I seem to be forward to more reliable articles and I think we all wish to thank so many good articles, blog to share with us. order of matrix movies

I will really appreciate the writer's choice for choosing this excellent article appropriate to my matter.Here is deep description about the article matter which helped me more. order of matrix movies

Buying jewelry is a major investment and you want to make sure that your investment is in the right hands. Juwelier Steiermark

Focusing only on questions where you are not doing well yet will save your valuable time and provide a solid and smooth learning experience. patente nautica