RealAspen News and Community Content Feed
By David O. Williams
Real Aspen – January 25, 2011
ESPN's Winter X Games turns 15 this week in Aspen, and like any stubborn and rebellious teenager, the event doesn't like to delve too deeply into bummer topics like global climate change. But the pro snow riders set to compete on Thursday seem to realize their livelihood is directly linked to the planet staying cold and snowy enough for them to engage in the nation's preeminent winter action sports festival. 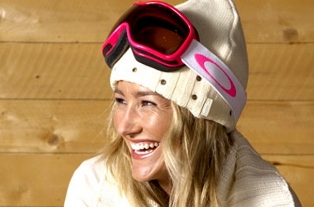 A partnership between the nonprofit Protect Our Winters (POW) environmental snow sports group and the Alliance for Climate Change Education (ACE), Hot Planet/Cool Athletes is attempting to engage and educate high school students on global climate change by having top professional athletes relay their own experiences with a warming planet.

“Part of POW's mission is to make sure that the next generation is better equipped to address climate change. As athletes, we now have a relevant platform to reach young students and create a movement of passionate youth leaders,” POW founder and professional snowboarder Jeremy Jones said in a release.

Wednesday, Olympic silver medalist and four-time X Games gold medalist Gretchen Bleiler visits her hometown Aspen High School to present the program. All of this leads into a weekend of X Games action at nearby Buttermilk, with competition running Thursday through Sunday.

“I'm definitely not a scientist. I'm not an expert on climate change. But being a professional snowboarder, I've been chasing snow year-round for the last 10 years and because of that I've been able to see the effects of climate change firsthand,” Bleiler told students at the CU Environmental Center in Boulder last fall.

In a Yale University study conducted last fall, only one in 10 Americans said they have a strong understanding of climate science, and 75 percent of Americans said that schools should teach our children more about the causes and effects of climate change.

Ted Ligety, an Olympic gold medalist in alpine skiing, told The Colorado Independent last year that climate change is having major impacts on where and when skiing competitions can be held. He said lower-elevation venues like Whistler, British Columbia (site of last year's Vancouver Winter Olympics), and Sochi, Russia (site of the next Winter Olympics in 2014), are becoming increasingly problematic.

“It's definitely difficult,” said Ligety, who works with the World Wildlife Fund to get the word out on climate change issues. “But it's good to go to some different places like Vancouver, and Sochi will be neat as well. But obviously on the global warming side of things the resorts in Sochi are a little higher elevation – at the least the base – from what Whistler is, but it's one of those things you never quite know.”

Whistler was plagued with rain and soft snowing during the Olympics last year, forcing numerous race postponements and cancellations. Sochi is a beach resort on the Black Sea, with a ski resort located in nearby mountains.

Damn you sun, for heating our planet and making it habitable for those of us who enjoy living.

Youre so cool! I dont suppose Ive read anything in this way before. So nice to locate somebody by original thoughts on this subject. realy thanks for beginning this up. this fabulous website is one thing that is needed on the internet, a person with a bit of originality. beneficial project for bringing a new challenge towards internet! https://strongtoto.com/major

I really appreciate this post. I have been looking everywhere for this! Thank goodness I found it on Bing. You have made my day! Thx again easyslot

Thank you a lot for sharing this with all of us you really know what you are speaking approximately! Bookmarked. Kindly also consult with my web site =). We may have a hyperlink trade contract between us! ufabet เข้าสู่ระบบ

You really make it seem really easy together with your presentation however I find this matter to be really one thing which I think I might by no means understand. It seems too complicated and extremely wide for me. I’m having a look forward to your next submit, I will attempt to get the grasp of it! wm

One scene in particular, set at the aforementioned strip club, left me roaring in laughter. استمارة طلب التأشيرة الهندية

I am often to blogging and i really appreciate your site content. This content has really peaks my interest. I am going to bookmark your internet site and maintain checking for first time details. 토토안전놀이터

I am continually looking online for articles that can facilitate me. Thank you! Kanada shoshilinch vizasi

Nice and concise article, many things i never knew. . . We never know how much talent is devastated this way. Fes to Merzouga 3-Day Desert Tour

A very informationrmative article and lots of really honest and forthright comments made! This certainly got me thinking a lot about this issue so nice one a lot for leaving! เล่น ไฮโลออนไลน์

Hello, Neat post. There’s an issue together with your web site in internet explorer, might test this… IE nonetheless is the market chief and a big portion of people will pass over your wonderful writing due to this problem. ซื้อหวย

I think I could disagree with the main ideas. I won’t share it with my friends.. You should think of other ways to express your ideas. kanadské vízum

As I website owner I believe the articles here is really fantastic , thankyou for your efforts. https://buy-twitch-followers.blogspot.com/2022/04/buy-twitch-viewers.html

ok glad you are taking her to the vet. this will save my usual speal. depending on how long the hip has been out, you are looking at three main options, if the hip is in fact out. first an x-ray will have to be taken to prove this.. . your vet may be able to “pop” the hip back in and with some care at home to keep her quiet, you may not have any trouble.. . if the hip has been out too long to easliy “pop” back in then an ehmer sling will be applied. this will keep the leg pinched up toward the body so she can’t use the leg until the muscles tighten and allow the hip to stay in place.. . worst case she will need an FHO this is where the femoral head of the femur is removed. it is not a rare sugery. it’s been done several times and your vet should be able to do it or refer you to someone who can. aside from aftercare of being careful of the site and keeping her calm, most dogs do very well. she may always have a limp, but she’s a pup and would adjust very well. often this is better than a hip replacement or anything else like that fho dogs tend to not have arthritis issues later on from the surgery.. . good luck and hope everything just “pops” into place tomorrow. Kennected

hi!,I love your writing so much! proportion we be in contact extra about your article on AOL? I require an expert on this space to resolve my problem. May be that’s you! Having a look forward to see you. Turkey Visa Application Center

Oh my goodness! a great post dude. Appreciate it However I am experiencing problem with ur rss . Do not know why Unable to subscribe to it. Perhaps there is any person getting identical rss problem? Anyone who knows kindly respond. Thnkx ไพ่สามกอง ออนไลน์

I actually appreciated studying your website, I discovered it in Yahoo. I recently came acrossa reallyinteresting pdf finder type website, its a pdf lookup engine and I think it is actually incredibly interesting for individuals who like reading through pdfs INDIAN VISA ONLINE

The perfect business will tap into people's emotions to remove price from the equation as much as possible. Sports has accomplished this goal. 꽁나라 가입머니

Depending on how social you are, this can be a fine approach. If you don't mind making idle conversation, however, you may be better served by talking to the people at your table if you are not involved in a hand. 토토사이트

Finding great quality discount jewelry stores online is not that hard if you know where to look. Juwelier Steiermark

If you are among the people who really want to pass their driving tests, then let me inform you that you are in the right place. Nevertheless, before we begin, comprare patente nautica