RealAspen News and Community Content Feed
By Real Vail
Real Aspen – August 21, 2013
Stage 2 of the 2013 USA Pro Challenge professional cycling race took riders to extraordinary heights on the route from Aspen to Breckenridge. At 126.1 miles, the stage, which was punctuated by three Nissan King of the Mountains (KOM) competitions and two Clif Bar sprint lines, tested the riders’ strength and endurance in the mountains of Colorado.

An impressive turnout of fans welcomed and cheered on the cyclists as they hit the streets of Breckenridge, where Mathias Fränk (SUI) of BMC Racing Team ultimately took home the win.

The level of racing that we saw during today’s stage of the 2013 USA Pro Challenge shows that these guys are here to win,” said Shawn Hunter, CEO of the USA Pro Challenge. “The crowds lining the route from Aspen to Breckenridge were amazing, and the enthusiasm and support up on the mountain passes is truly a sight to see.”

Following two neutral laps around the City of Aspen under bright blue skies, the riders were off for Stage 2 of the 2013 USA Pro Challenge, which would provide a harsh introduction to the mountainous terrain of Colorado with three big Nissan King of the Mountains (KOM) competitions. 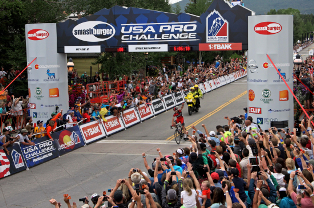 Mathias Frank rides to victory in Stage 2 of the USA Pro Challenge in Breckenridge on Tuesday (USAPC photo).

The gap continued to grow as the riders climbed the familiar battleground of Independence Pass, which at 12,000 ft. is the highest point reached in any professional cycling race. The well-known, epic climb drew fans from all around the world to cheer on the riders as they suffered to the top. With enthusiastic costumed fans running alongside, Schär crested the pass first, followed by Cooke and Lemus.

Leading into the approach to the Feed Zone, hitting speeds of more than 35 mph, David Millar (GBR) of Team Garmin-Sharp and Kanstantin Siutsou (BLR) of Sky Procycling pulled away from the peloton to start the chase and eventually reached the three out front to form a break of five riders. As they zoomed through Buena Vista and crossed the first Clif Bar sprint line of the day, Lemus hit the line first, then Schär and Millar.

A little more than three hours into the race, as the course prepared to turn back uphill, the peloton hit the gas and with RadioShack Nissan Trek and Cannondale Pro Cycling leading the way, they began to close the gap, eventually swallowing up the break. Soon after though a new break was formed with 13 riders pulling away, including:

“We just had to have representation in the breakaway because it’s always better to be in front than to be chasing,” said Morton. “We put two in it, which took the pressure off the other guys.”

As the break approached the second and final sprint of the day in Fairplay, Van Avermaet attacked and crossed the line first, followed by Schleck and Beyer. With two more climbs and 26 miles to go to the finish in Breckenridge, it was still anybody’s stage.

On the climb up to the next Nissan KOM competition of the day at Hoosier Pass, riders began to drop off the break. Morton however saw an opportunity and started pulling away to take the maximum KOM points, followed by Fränk and Craddock. Taking the descent at speeds around 50 mph, the three riders grouped together with a few members of the original break following behind and the peloton still on the chase.

Reaching the final Nissan KOM of the day at Boreas Pass, Fränk rode through the sea of fans to crest the summit first, followed by Morton and Craddock. Now, with only 2.5 miles to go, the pressure was really on. Knowing it was now or never, Peter Sagan (SVK) of Cannondale Pro Cycling, Tejay van Garderen (USA) of BMC Racing Team, Tom Danielson (USA) of Team Garmin-Sharp and Darwin Atapuma (COL) of COLOMBIA made a move out of the peloton to catch the break. And in a sprint through Breckenridge, Fränk took the stage win, followed close behind by Morton and Sagan.

“I really had one shot, and today I knew that I could make it there on the short, steep climb,” said Fränk. “I definitely had the plan to go for the stage win today. The altitude here really got to me. I really had to go super deep there at the finish. Now I have a stage win here and I’m really happy with that.”

In the race for the jerseys, Morton claimed the Smashburger Leader Jersey and the Colorado State University Best Young Rider Jersey. Sagan held onto the Clif Bar Sprint Jersey, as did Cooke to the Nissan King of the Mountains Jersey. The FirstBank Most Courageous Rider Jersey went to Fränk for his impressive racing.

Stage 3 will be difficult to predict for even the biggest cycling fans. Can the climbers hold off the field or can the sprinters hang on? Stage 3 of this year’s USA Pro Challenge is wide open for the taking. After leaving Breckenridge, Swan Mountain Rd. provides a great launch pad for breakaways as the riders weave north to Kremmling, but it’s all just a prelude to the day’s main showdown on Rabbit Ears Pass. Climbing the challenging eastern slope will give the climbers a chance, but they will have to hold off the sprinters for 20 miles after cresting the top as they head downtown Steamboat Springs. Can they do it? Or will there be a repeat of 2011’s thrilling and monstrous field sprint?

How to Watch the 2013 USA Pro Challenge

Fans can view the race on the daily NBC Sports Network and NBC broadcasts. Stage 3 will air live on NBC Sports today (Wednesday) at 3 p.m. MT.

In addition to the broadcast, fans can follow the 2013 USA Pro Challenge with the Tour Tracker. Available on the race website, as well as through a free download on iTunes and Google Play, the Tour Tracker includes:

* Live video coverage of the last two hours of every stage

among us During an epidemic season like this, what do you generally do? run 3 which I just discovered, is a fantastic game to play throughout the winter months. I'd like to invite you to join me right now.

This is a fabulous post I seen because of offer it. It is really what I expected to see trust in future you will continue in sharing such a mind boggling post click here

This is getting a bit more subjective, but I much prefer the Zune Marketplace. The interface is colorful, has more flair, and some cool features like ‘Mixview’ that let you quickly see related albums, songs, or other users related to what you’re listening to. Clicking on one southernmost point buoy of those will center on that item, and another set of “neighbors” will come into view, allowing you to navigate around exploring by similar artists, songs, or users. Speaking of users, the Zune “Social” is also great fun, letting you find others with shared tastes and becoming friends with them. You then can listen to a playlist created based on an amalgamation of what all your friends are listening to, which is also enjoyable. Those concerned with privacy will be relieved to know you can prevent the public from seeing your personal listening habits if you so choose.