Vail gets nod to replace Chair 4 with six-pack chairlift

Construction will begin immediately and the lift will be operational for the 2013-14 ski and snowboard season, officials said.

The new Mountaintop Express Lift will feature loading gates with a right angle load and a loading conveyor system, which has been shown to reduce the number of lift stops and slows and increase the efficiency of the lift.

The systems have been widely used throughout European resorts for years and this will mark the first loading conveyor on a high-speed, six-passenger lift of its kind in North America.

The new lift will result in a 33 percent increase in capacity, or 3,600 people per hour, which is the same capacity as Vail’s new Gondola One.

The old Mountaintop Express Lift was installed in 1985 and provides access to Patrol Headquarters and a number of surrounding areas including the Back Bowls and Blue Sky Basin. 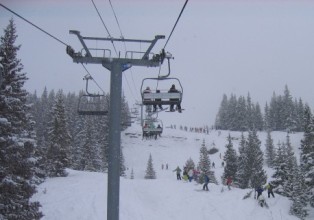 The current four-passenger Chair 4 at Vail will be replaced with a six-pack lift this summer.

“The Mountaintop Express Lift is one of the busiest lifts on Vail Mountain,” said Chris Jarnot, senior vice president and chief operating officer of Vail Mountain. “Upgrading it to a six-passenger lift and adding capacity will make a noticeable improvement in wait times and skier/snowboarder circulation. The use of the loading conveyor, which is a common feature at top European resorts, is an added luxury and reduces the frequency of misloads as well.”

The new lower lift terminal of the Mountaintop Express Lift will be located approximately 90 feet to the east of the previous terminal, resulting in a lift maze configuration that will decrease cross-traffic of skiers and snowboarders in the surrounding area. The upper terminal location will undergo minor adjustments to accommodate a more efficient circulation of skiers and snowboarders.

The fixed-grip triple Doppelmayr lift will increase capacity by 50 percent over the existing lift, which mostly provides access to the Golden Peak area for beginners as well as access to Vail Village. The lower terminal will be adjusted slightly in both location and elevation to allow beginner guests easier access to the lift and to facilitate better use of both the west and east lift mazes.

“The new triple lift in Golden Peak will allow for twice the capacity of our three to six year olds enrolled in lessons, as they are required to ride the lift with an adult,” said Chris Jarnot, senior vice president and chief operating officer of Vail Mountain. “While this upgrade may seem small to our more experienced guests, it’s a critical improvement for our newest and youngest visitors to get them on the hill and learning faster.”

The majority of both old lifts will be recycled and some components will be kept as spare inventory for Vail or other Vail Resorts mountains.

I had the chair lift ride last month and it was amazing. I enjoyed the lift ride. It was adventurous and memorable. I would recommend their cheap essay writing service uk to everyone who is seeking somebody's help to manage his papers. Such kinds of adventures are great in life must try once to have fun.

Information blog, it was very cooperative! I simply began in this and I'm attractive more familiar with it better! Thanks, keep doing astonishing. Website: Foreign B2B Marketplace

The article posted was very informative and useful. You people are doing a great job. Keep going. www.name-pics.com

Most problems are of temporary nature and a break can refresh your brain as well. If it is a technical problem , right the software. Restart your computer or your modem. https://www.comarcadelasierradealbarracin.es/5359-2/

we are also ready for contributing in this project i am a part of biggest manufacturing industry ill discus this matter with our B2b Importers about this chairlift project in U.S.A.

access to Vail Village. The lower terminal will be adjusted slightly in both location and elevation to allow beginner guests easier access to the Assignment Writing Services UK

Thanks for sharing this information. I really like your blog post very much. You have really shared a informative and interesting blog post with people.. https://www.posterprintcenter.com/aluminum-signs.html

The town of Vail, Colorado is voting on a proposal that would replace the popular Chair 4 with a six-pack chairlift. The change will be controversial and impact many in the ski community. You can check this https://www.goldapple-alu.com/ and get manage their tips for aluminum furniture. Vail Mountain Resort has been granted permission to build the world's first six-pack chairlift. Six-pack is essentially a narrower version of the conventional Chair 4, which will open in 2017 but be replaced by a six-pack in 2020 as Vail looks to improve customer service and bump lift capacity by 15 percent.

I've been looking for info on this topic for a while. I'm happy this one is so great. Keep up the excellent work scam risk

We are really grateful for your blog post. You will find a lot of approaches after visiting your post. Great work scam risk

Super site! I am Loving it!! Will return once more, Im taking your food likewise, Thanks. scam risk

I have express a few of the articles on your website now, and I really like your style of blogging. I added it to my favorite’s blog site list and will be checking back soon… scam risk

It is the intent to provide valuable information and best practices, including an understanding of the regulatory process. scam risk

Its as if you had a great grasp on the subject matter, but you forgot to include your readers. Perhaps you should think about this from more than one angle. scam risk

A debt of gratitude is in order for sharing the information, keep doing awesome... I truly delighted in investigating your site. great asset... scam risk

Well, this got me thinking what other workouts are good for those of us who find ourselves on the road or have limited equipment options. scam risk

I have checked this link this is really important for the people to get benefit from. scam risk

I was surfing net and fortunately came across this site and found very interesting stuff here. Its really fun to read. I enjoyed a lot. Thanks for sharing this wonderful information. scam risk

Very cozy looking rooms. Let me know if your going to Mexico. Oh and btw. you should read our Tipping in Mexico guide if you do. It will save you a lot of awkward moments. 88bet

Several clips and other fasteners are produced by All Axis for securing heat-generating electronics to unique heatsinks. In high-volume orders, the copper heat pipe integrated into the base of the bespoke heatsink further lowers costs. Please check and try https://www.sjhmalu.com/product/custom-cnc-machining-parts-aluminum-profile Before choosing a heatsink, it is essential to ascertain the precise needs because the custom heatsink is available in a variety of shapes, sizes, and materials. These technologies assist engineers in designing special custom heatsinks that satisfy the individual requirements of a customer. Numerous engineering and commercial applications make use of custom extruded heat sinks. These materials are frequently used in medical devices since temperature regulation is important.

Academic inside has always proved to be available for our customers and we have never let our customers down. We make sure to provide our customers with the content they desire. Regardless of the stature of the work. [url=Write My Online Dissertation UK]https://academicinside.co.uk/pay-someone-to-write-my-dissertation/[/url]

Academic inside has always proved to be available for our customers and we have never let our customers down. We make sure to provide our customers with the content they desire. Regardless of the stature of the work. https://academicinside.co.uk/pay-someone-to-write-my-dissertation/

of course data entry services are very expensive that is why always make a backup of your files:: Bespoke Dress Shirts