RealAspen News and Community Content Feed
By Scot Kersgaard
The Colorado Independent – June 13, 2012
Ken Buck is back, and he has his work cut out for him. The Weld County district attorney will spearhead the campaign against legalization of marijuana. Buck, a Republican, ran for the U.S. Senate in 2010, losing to appointed incumbent Michael Bennet.

“I just got together with Roger Sherman and Maria Garcia Berry (at CRL Associates) and offered my services to help defeat Amendment 64,” Buck told the Colorado Independent, adding that he didn't have a title or any official role in the campaign at this time. He said he will speak out on the issue as much as he can and also help with fundraising.

“If marijuana becomes legal, we will see a proliferation of use among teenagers,” Buck said.

The announcement that Buck would be the public face of the opposition was greeted with enthusiasm by the Campaign to Regulate Marijuana Like Alcohol, which also touted a new poll showing legalization favored by a large majority of Colorado voters.

"We welcome the news that Ken Buck has been selected to be one of the public faces of their campaign," said Betty Aldworth, advocacy director for the Campaign to Regulate Marijuana Like Alcohol. 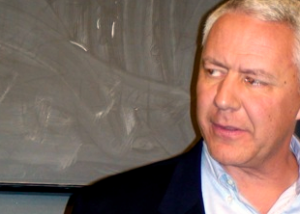 "From the day we turned in our signatures, we have been talking about the importance of reaching out to female voters. We know the decision about whether to continue the policy of marijuana prohibition is a very personal one for many women. As Mr. Buck's poor performance among women voters in his recent senate bid demonstrated, he is challenged in terms of connecting with women and respecting their concerns. I don't believe the women of this state will be swayed by Ken Buck telling them how they should vote on this issue. They will consider the facts and make thoughtful decisions on their own. We are comforted by the fact that if as many women support Amendment 64 as opposed Ken Buck in 2010, we will cruise to victory in November," Aldworth said.

Buck's narrow come-from-ahead loss to Bennet came largely--but not entirely--as a result of his failure to connect with women. He also alienated LGBT voters by comparing homosexuality with alcoholism on national television. He welcomed the campaign support of leading climate-change denier Sen. James Inhofe (R-OK), questioned the separation of church and state and struck out with Hispanic voters.

"Mr. Buck joins 'volunteer' professional spokespeople and staff who have been trying to make their campaign about youth. We are happy to have that discussion. The simple truth is that marijuana prohibition is the worst possible system in terms of protecting the health and safety of teens. It is easier for teens to find and purchase marijuana on the streets than it is for them to purchase alcohol, and the marijuana being purchased is unregulated, not tested, and not labeled. To make matters worse, those teens who are inevitably going to use marijuana must seek it out in an underground market where they might be exposed to more dangerous drugs like cocaine and heroin. We want to take marijuana out of that market, and establish a controlled system where sales are strictly limited to those 21 and older and vendors demand proof of age. Our opponents want to keep the current, failed system," Aldworth said in a press release.

The news of Buck joining the anti-legalization campaign came just as a Rasmussen poll of 500 likely voters finds that Coloradans favor legalizing marijuana--as long as it is regulated similarly to alcohol and cigarettes--by a whopping 61 percent to 27 percent.

"The vast majority of Coloradans appear to be ready to end marijuana prohibition and replace it with a more responsible system in which it is regulated and taxed similarly to alcohol," said Aldworth in another press release.

"Our current system of prohibition is the worst possible system when it comes to keeping marijuana away from teens. It is driving marijuana into the underground market where proof of age is not required and where other illegal products might be available.

"By regulating marijuana like alcohol, we can better control it and generate significant and much-needed tax revenue for the state. We can also stop making adults criminals simply for using a substance that is objectively less harmful than alcohol."

The High School Youth Risk Behavior Survey documented that today significantly more teens in the United States are using marijuana than cigarettes. Just more than 23 percent of high school students nationwide reported using marijuana within 30 days of taking the latest survey, up from 20.8 percent in 2009. Meanwhile, 18.1 percent reported past-30-day cigarette use, down from 19.5 percent in 2009.

"Marijuana prohibition has utterly failed to reduce teen access to marijuana, and it is time for a new approach," said Aldworth. "Strictly regulating tobacco and restricting sales to minors has led to significant decreases in use and availability, and we would almost surely see the same results with marijuana.

"By putting marijuana behind the counter, requiring proof of age, and strictly controlling its sale, we can make it harder for teens to get their hands on it," Aldworth said.

Interestingly, the CDC report also found that Colorado has bucked the national trend of increasing teen marijuana use. Nationwide, past-30-day marijuana use among high school students climbed from 20.8 percent in 2009, to 23.1 percent in 2011. Meanwhile, in Colorado, it dropped from 24.8 percent to 22 percent.

Aldworth pointed out that marijuana use among teenagers in Colorado has gone down since the state legalized marijuana for medical use.

"This report suggests that even the partial regulation of marijuana could decrease its availability to teens," Aldworth said. "Those who shrug off this mounting evidence are shrugging off the health and safety of our young people."

Buck said prohibition has helped to keep use down, but that it has not been completely successful, either. “A lot of what we have tried has failed,” he said. “We need to spend more on education and treatment.”

Likewise, he said it is a myth that legalizing marijuana will somehow reduce use of cocaine, heroin or other drugs. “Most kids first exposure to marijuana is not from a dealer,” he said, “it is from friends in social situations.”

Legalizing it, he insists, will increase the total volume of marijuana available in Colorado, and the total amount available to kids.

If Amendment 64 passes, Buck said, marijuana will become legal in Colorado in spite of federal laws that say marijuana is illegal in all 50 states. “Sure, the feds raid the occasional medical marijuana clinic, but they have limited resources, and if this passes, they are not going to be rounding up adults who have a few joints,” Buck said.

He predicted that if the amendment passes, Colorado will see its high school drop-out rate increase, highway accidents increase and more kids expelled from school.

Sherman, whose firm, CRL Associates, is running the anti-legalization campaign, said they were glad to have Buck on board.

“He's a sitting DA. He has been terrific, and he is very focused on this issue,” said Sherman. “I'm glad to have him on this campaign.”

Taxpayers spend $40 Billion-a-year on a prohibition that *doesn't* stop people using marijuana. Are we all so rich that this colossal waste of money is no big deal?