Vail's Lindsey Vonn broke the all-time women's record for most points in a single World Cup season on Saturday, finishing eighth in the World Cup Finals slalom in Schladming, Austria, but she came up 20 points short today in her bid to match or break the all-time men's record of 2,000.

Vonn needed to finish 12th or better in today's giant slalom but lost a pole at the start of the second run and wound up 24th. Only the top 15 racers score points at the World Cup Finals.

Vonn wound up with an American record 12 World Cup wins this season, 53 for her career (third on the all-time list) and 1,980 points, eclipsing the previous record of 1,960 points set by Croatia's Janica Kostelic in 2006. Vonn also won her fourth overall title in the last five years – another American record.

This season, Vonn won the downhill, super-G, super combined and overall titles – setting a new American record of 16 career titles. She also finished the season second in the GS standings. 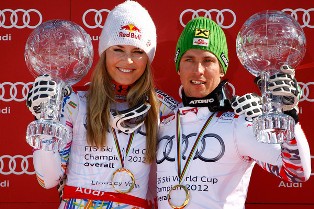 “I am really happy with the season, and it has gone incredibly well,” Vonn said. “If you had told me at the beginning of the season that I would be second in the giant slalom standings and would win the overall title before the finals, I would have said that is awesome but not possible. It is definitely more than I expected.”

German Viktoria Rebensburg won the GS race and the season GS title today. Vonn was gunning for her third GS win this season after never winning in the discipline during her career.

“It has been a long year for me,” Vonn said. “I am definitely disappointed in the way today's race turned out. I was a little bit conservative in the first run, but I was still in a good position to get the 12th place I needed for 2,000 points, but, unfortunately, I lost my pole out of the start of the second run.”

Vonn was trying to break the 2,000-point record set by Austria's Hermann Maier during the 2000 World Cup season.

According to Ski Racing Magazine, the basket of Vonn's right pole broke through a snow layer and got caught behind a rubber-encased metal pad. Vonn lost he pole and then skied the entire second run with just one pole.

“Honestly, I have never had that happen in my entire life,” Vonn said. “In all my years of skiing I have never lost a pole out of the start and it was really bad timing to say the least. But life happens. I just have to look towards next year and ski the last race with two poles and maybe the 20 points will be on my side.”

One the men's side, Austrian slalom great Marcel Hirscher thrilled the hometown fans with his first overall title. Park City, Utah's Ted Ligety wound up second in his quest for a fourth straight giant slalom title.

In the exciting running arcade game color tunnel , your goal is to get the highest score while running through a tunnel full of moving obstacles.