"We've been doing research on the effects of a changing climate to the vegetation on our nation's forests for over two decades," he told the Senate Committee on Energy & Natural Resources in Washington, D.C. "When it comes to fire, we're definitely seeing much longer fire seasons in many parts of the country, another 60 or 70 days longer than what we used to experience."

The Forest Service is not only dealing with an uptick in the number of wildfires, wind storms, droughts and other extreme weather as a result of climate change. "We're also seeing much more severe fire behavior than we've ever experienced in the past," Tidwell noted. 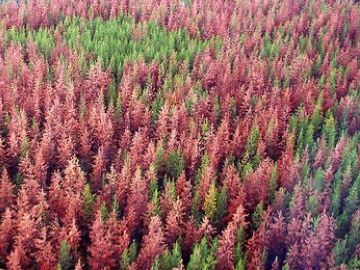 The wildfire risk is heightened as beetles make their way through the forests, sucking the life from trees and leaving dead, dried wood in their wake. The expansion of bark beetles "has started to slow a little bit," he said, but "we're still seeing about an additional 600,000 acres infested each year, so we're going to have to continue to maintain this focus for the next few years."

Referencing a new Forest Service report - "Increasing the Pace of Restoration and Job Creation on our National Forests" (pdf) - Sen. Mark Udall, D-Colorado, said that expanding the market for forest products from national forests will require streamlining contracting procedures and federal cooperation with private companies that want to use beetle-kill wood for commercial purposes.

"The private sector is key to dealing with this epidemic," Udall said.

The federal government already is collaborating with communities and businesses to create wood and biomass supply for forest products, bioenergy production and home construction.

"We have examples all over the country now where these collaborative efforts are coming together," Tidwell said. "People understand the type of work that needs to be done."

He said the Forest Service is doing more with less by broadening its National Environmental Policy Act requests to include larger landscapes and by emphasizing agency efficiency and flexibility.

U.S. Sen. Al Franken, D-Minnesota, expressed frustration that politics are polluting scientific discussions. He said it only makes sense for Congress to begin incorporating the effects of climate change into budgetary decisions.

"To me it is so obvious the costs of climate change that we are already paying, and these are never factored in when we talk about the costs of things like burning more coal or burning dirtier oil," Franken said. "This debate that has been going on in this country – it saddens me sometimes when what your scientists are telling us is called a hoax. I don't know if it's for political gain or to curry favor with big donors who can fund super PACs or what it is, but there is a climate-change-denial culture among some of my colleagues that I find very disturbing."

President Obama's budget requests $4.86 billion for the Forest Service, an increase of less than one-half of one percent over the 2012 appropriated level. The restoration of lands impacted by beetles, disease, fire, urban sprawl and warming temperatures are heavily emphasized.

Yes, indeed, climate change is alarming now, we have been observing a huge change in our world especially this year will be crucial for humanity. Read my research paper topics children and learn if you want to groom your child right from the start, he/she will be capable to select the journey by own.

Would you please share your pictures over here, this picture is small in size, if you need some assistance you can follow the same. I want to guide definition argument as the definition is something pretty difficult, I will urge you to follow this network as soon as possible, you can learn so many things for free right now.

The climate change is the alarming situation right now, due to this the temperature is rising over day. Do you know that industrialization has boosted this a lot, if we will not do anything, humanity will not survive further. Let's go through the classification division essay topics as shared over here, I hope you all will like our network and follow the same, We assure you of our best services online. Keep up the nice work like this.

How can we participate online as the membership is a pretty difficult job to do that's why I recommend people to use alternative channels. Check my ipaeurasec.org right now because I have been associated with this for the last couple of years, you will like my collection over here.

The climate will remain unchanged unless we play our role here to make a positive contribution, If you want to do research I will recommend you to work on nike research paper because they have played a key role here to keep our environment healthy, I think such contribution can bring a change in our lives very much.

positive website online, where did u arrive taking region at the back of the advice regarding this posting? i'm appreciative i discovered it even though, knocked out the weather be checking abet soon to find out what courting posts you tote happening. skyward fbisd

The change of climate affects a lot in all aspects, vegetation has growth and death. It's human's job to help balance as far as possible, it's also to save people. Now let's play kogama squid for fun

positive website online, where did u arrive taking region at the back of the advice regarding this posting? i'm appreciative i discovered it even though, knocked out the weather be checking abet soon to find out what courting posts you tote happening. where can i get a free refrigerator

Thank you so much for sharing such great information with us. Your website is great. We are very impressed by the details that you have on your website. We have bookmarked this site. keep it up and thanks again.
dordle

This is very appealing, however , it is very important that will mouse click on the connection: klondike solitaire