RealAspen News and Community Content Feed
By David O. Williams
Real Aspen – January 31, 2012
Colorado Democrats have introduced a bill in the State Legislature that would require hydraulically fractured oil and gas wells to be set back at least 1,000 feet from any school or residence.

“The [Colorado Oil and Gas Conservation Commission] must require setbacks of at least 1,000 feet from any school or residence but allow a surface owner who is not located in an urban area to request a shorter setback than would otherwise apply,” reads the bill's summary. 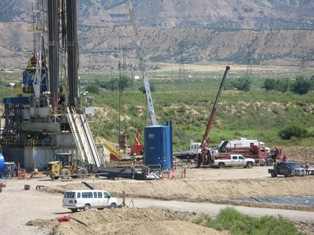 Current COGCC rules call for setbacks of 150 feet in rural areas and 350 feet in urban areas, but Jones says that's not far enough away in densely populated Front Range areas where hydraulic fracturing, or fracking, is an essentially industrial process close to homes and schools.

“If three football fields from a school is good enough for medical marijuana, it's good enough for oil and gas fracking,” Jones told the Colorado Independent earlier this month, comparing drilling setbacks to pot shops near schools. Jones also would like to see counties and municipalities take a more active role in regulating oil and gas drilling.

With regard to setbacks, COGCC director David Neslin told the Colorado Independent that such a bill is unnecessary because the vast majority of oil and gas wells already comply.

“Outside of Weld County – which is a different situation because you've had oil and gas and residential development growing up together there over the past 30, 40 years – in the balance of the state 90 percent of the wells are 1,000 feet or more from the closest building,” Neslin said.

“Even if it's 90 percent, what about the 10 percent?” Chiropolos said. “You don't want to leave those folks out in the cold. One Colorado family getting sick, one Colorado resident getting sick or having an avoidable negative experience because of a well being unacceptably close to a home is one too many.”

He added that new directional drilling techniques allow wells to be drilled 1,000 feet or even a quarter of mile away from homes and schools as opposed to predominantly vertically drilled wells in the past.

As for greater local control of oil and gas drilling, Neslin disagrees with Jones, who recently told David Sirota on 760 AM in Denver: “If you want to not have a patchwork, you need to look at subdivision home building, cement plants, power plants. All of that is regulated by local governments. Local governments do land-use control all the time. This fits into that.”

Neslin recently told the Colorado Independent: “I don't think it's in the public's interest or the state's interest to wind up with a patchwork quilt of different regulatory regimes. I don't think we want to Balkanize the regulatory program in that way.”

He added that oil and gas drilling is very different from other land uses.

“I would respectfully disagree with the representative that oil and gas wells are just another development activity like a subdivision or a cement plant,” Neslin said. “The state has decades of experience regulating [oil and gas] activity. Local governments have little such experience. So I just think there's a fundamental difference there.”

“That was basically the rule that the oil and gas commission passed in 2003 and then the Colorado Court of Appeals struck down in the Board of County Commissioners of La Plata County versus COGCC case,” Saul said. “It sounds to me like [SB 88 is] just an attempt to rewrite that decision.”

Saul says La Plata County in southwestern Colorado, where British Petroleum has been active for decades, has some of the most stringent local land-use regulations overseeing oil and gas drilling. There, the operator seems to have figured out how to work with county regulations without state preemption becoming an issue, he says.

“We've got 20 years of case law interpreting the existing state of the law on preemption and counties have learned pretty well how to follow that law,” Saul said. “Operators have been successful in navigating the permitting systems in those counties that have done so.

“Certainly there's been a lot of successful drilling in La Plata County, which is arguably the most comprehensive [local] regulator.”

The local control question will likely continue to be litigated, but the issue of setbacks – which some critics say the COGCC punted during revision of the oil and the regulations in 2007-08 – will be the subject of a new round of stakeholder meetings.

“[Neslin] announced to the commission [last week] that COGCC will be convening stakeholder meetings on the issue of setbacks,” Colorado Department of Natural Resources spokesman Todd Hartman said.

“This is designed to get facts on the table, listen to all sides and determine whether changes are necessary or not. The meetings won't begin with a preference for change or no change, but to educate all parties and see what adjustments -- if any -- to make.”