RealAspen News and Community Content Feed
By David O. Williams
Real Aspen – January 7, 2012
Some strange white substance sifted out of the sky this morning in Vail – apparently something called snow.

So far it hasn't been enough to register on the morning snow report, but as of 7 a.m. about a half inch had fallen in West Vail. After a prolonged period of warm, dry weather, even that much snow qualifies as breaking news.

Forecasters are calling for another 1-2 inches today and another 2-4 inches tonight in the Vail Valley.

However, once again, the heavier totals will be east of the Continental Divide as the storm track heads more to the south and west. Still, Vail Valley snow riders will take what they can get.

Another storm, according to opensnow.com, is headed our way for Wednesday night of next week. But don't wait for that one, advises opensnow's Joel Gratz:

“Enjoy the snow this weekend!” he wrote on Friday. “It's not a massive storm, but conditions Saturday at close and Sunday at open could be the best they've been in weeks.” 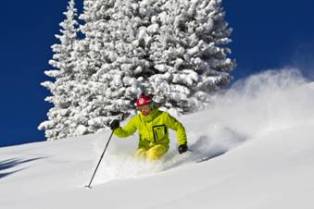 Oh what a difference a year makes. This scene was from last season at Vail, where the Back Bowls still aren't open this season.

Of course, that's not saying much, because ever since about mid to late November, Mother Nature has turned off the snow spigot in an historic way across much of the American West.

Conditions were actually ahead of schedule at that point, allowing Vail to open more terrain than usual and Beaver Creek to host extra World Cup ski races in early December that were cancelled in Europe due to a lack of snow.

Since then, the snow has returned to parts of Europe, but December was a record dry month for many of the Vail Resorts' ski mountains in Colorado and California.

“We have had some very unusual weather so far this season,” Vail Resorts CEO Rob Katz said Friday. “For the first time in 30 years, a lack of snow has not allowed us to open the back bowls in Vail as of January 6, 2012, and, for the first time since the late 1800s, it did not snow at all in Tahoe in December.”

Katz said there was enough snow early to allow for a decent holiday season at most of the company's Colorado resorts.

But now all eyes are on the sky heading into 2012. Vail so far has had only 80 inches of snow. It averages 350 a season, and last season saw the all-time record of 525 inches.
Southern resorts in Colorado – such as Wolf Creek, Telluride and Durango – have fared a little better than the ski areas in the northern and central mountains. But even those resorts have been hurting for new snow as of late.

Storms earlier in the season were splitting to the north and the south, meaning Jackson and Grand Targhee, Wyo., have been doing OK. So have Big Sky and Bridger, Mont. But even locals there report conditions are less than epic by their standards.

Still, they're better than Colorado, so Big Sky made headlines this week by offering free skiing in January to anyone holding a Vail Resorts' Epic Pass.

Grand Targhee sent out a release on Friday offering free skiing to anyone holding a season pass at any U.S. or Canadian ski resort for this 2012 season. The offer is good for anyone who books three nights or more of lodging through Grand Targhee's website or central reservations.

“We respect how precious skiing and riding is to the die-hard winter enthusiasts who commit to season pass purchases,” said Ken Rider, director of marketing and sales for Grand Targhee Resort, which has enjoyed nearly twice as much snow as Vail so far this season “Weather is fickle and we realize that every resort is but one big dump away from the record conditions we all enjoyed last season.

“For now, we have gotten loads of snow and we want to reach out and use this early season to introduce skiers who love powder to the 2,602 acres available at the ‘Ghee.”

Colorado Ski Country USA, the trade association for all of the non-Vail Resorts ski areas in the state, reports workers at its member resorts are performing snow dances and other rituals to try to change the state's snow mojo for the rest of the season.

Ski season's languished deep into spring, but Vail ski resort boasts a "huge snowstorm" is ahead this weekend — a total of five inches to be exact. Extra snow hits Monday and Tuesday, according to Vail Resorts. "Over the last seven days, we measured 4 inches at our weather station at Vail and 4 inches in Lionshead," Laura Luthin, a meteorologist with the National Weather Service in Boulder, told the Denver https://medium.com/@provista-plumbers-perth/about Post. "The most recent storm Monday and Tuesday added another four inches of snow."

hy I have been reading your blogs for a long time as your blogs are amazing and interested .I am using the top vpn softwares to secure my online work ,Computer programming is the process of performing a particular computation, usually by designing and building an executable computer program.Programming is the process of giving machines a set of instructions that describe how a program should be carried out. Programmers will spend their whole careers learning a variety of programming languages and tools so they can effectively build computer programs.

Tree cabling is a decorative way of bundling and Visit this Tree Service company a curtain string between two or more poles.

That is really nice to hear. thank you for the update and good luck. 321chat

These are some great tools that i definitely use for SEO work. This is a great list to use in the future.. heathrow taxi transfer

This is really a nice and informative, containing all information and also has a great impact on the new technology. Thanks for sharing it boudoir photography

Great .. Astounding .. I'll bookmark your blog and take the feeds likewise… I'm glad to discover such a significant number of valuable information here in the post, we need work out more procedures in such manner, a debt of gratitude is in order for sharing. 마사지

I wanted to thank you for this great read!! I definitely enjoying every little bit of it I have you bookmarked to check out new stuff you post. online business

You might comment on the order system of the blog. You should chat it's splendid. Your blog audit would swell up your visitors. I was very pleased to find this site.I wanted to thank you for this great read!! online business

I have express a few of the articles on your website now, and I really like your style of blogging. I added it to my favorite’s blog site list and will be checking back soon… online business

I wanted to thank you for this great read!! I definitely enjoying every little bit of it I have you bookmarked to check out new stuff you post. online business

I feel very grateful that I read this. It is very helpful and very informative and I really learned a lot from it. online business

Just pure brilliance from you here. I have never expected something less than this from you and you have not disappointed me at all. I suppose you will keep the quality work going on. online business

I would also motivate just about every person to save this web page for any favorite assistance to assist posted the appearance. online business

This is very educational content and written well for a change. It's nice to see that some people still understand how to write a quality post! online business

This post is good enough to make somebody understand this amazing thing, and I’m sure everyone will appreciate this interesting things. online business

I was surfing net and fortunately came across this site and found very interesting stuff here. Its really fun to read. I enjoyed a lot. Thanks for sharing this wonderful information. online business

This was among the best posts and episode from your team it let me learn many new things. online business

The next time I read a blog, I hope that it doesnt disappoint me as much as this one. I mean, I know it was my choice to read, but I actually thought you have something interesting to say. All I hear is a bunch of whining about something that you could fix if you werent too busy looking for attention. online business

This is a good post. This post gives truly quality information. I’m definitely going to look into it. Really very useful tips are provided here. Thank you so much. Keep up the good works online business

Easily, the article is actually the best topic on this registry related issue. I fit in with your conclusions and will eagerly look forward to your next updates. Just saying thanks will not just be sufficient, for the fantasti c lucidity in your writing. I will instantly grab your rss feed to stay informed of any updates. online business

I definitely enjoying every little bit of it and I have you bookmarked to check out new stuff you post. online business

This is very useful post for me. This will absolutely going to help me in my project. online business

I can set up my new idea from this post. It gives in depth information. Thanks for this valuable information for all,.. online business

Very informative post ! There is a lot of information here that can help any business get started with a successful social networking campaign ! online business

This is truly a decent and useful, containing all data furthermore greatly affects the new innovation. A debt of gratitude is in order for sharing it  188bet app

Mass Texting capability, you can achieve more than 99.2% open & read ratio. A quality mass text messaging & text blast service with affordable & low pricing just as low as $0.0083 to USA. With this international bulk sms service, you can also enjoy other features like SenderID*, SMS API & SMS Gateway access and much more. Signup now and get 125+ SMS Free.

Tree Company Fort Wayne, located in Fort Wayne Indiana, is the foremost tree removal and tree trimming company in Tree Company Fort Wayne. We have been servicing clients from the surrounding communities for more than 10 years. Our reputation has spread by word of mouth as we have tackled jobs that others could not or will not do. We provide full service tree maintenance at affordable prices.